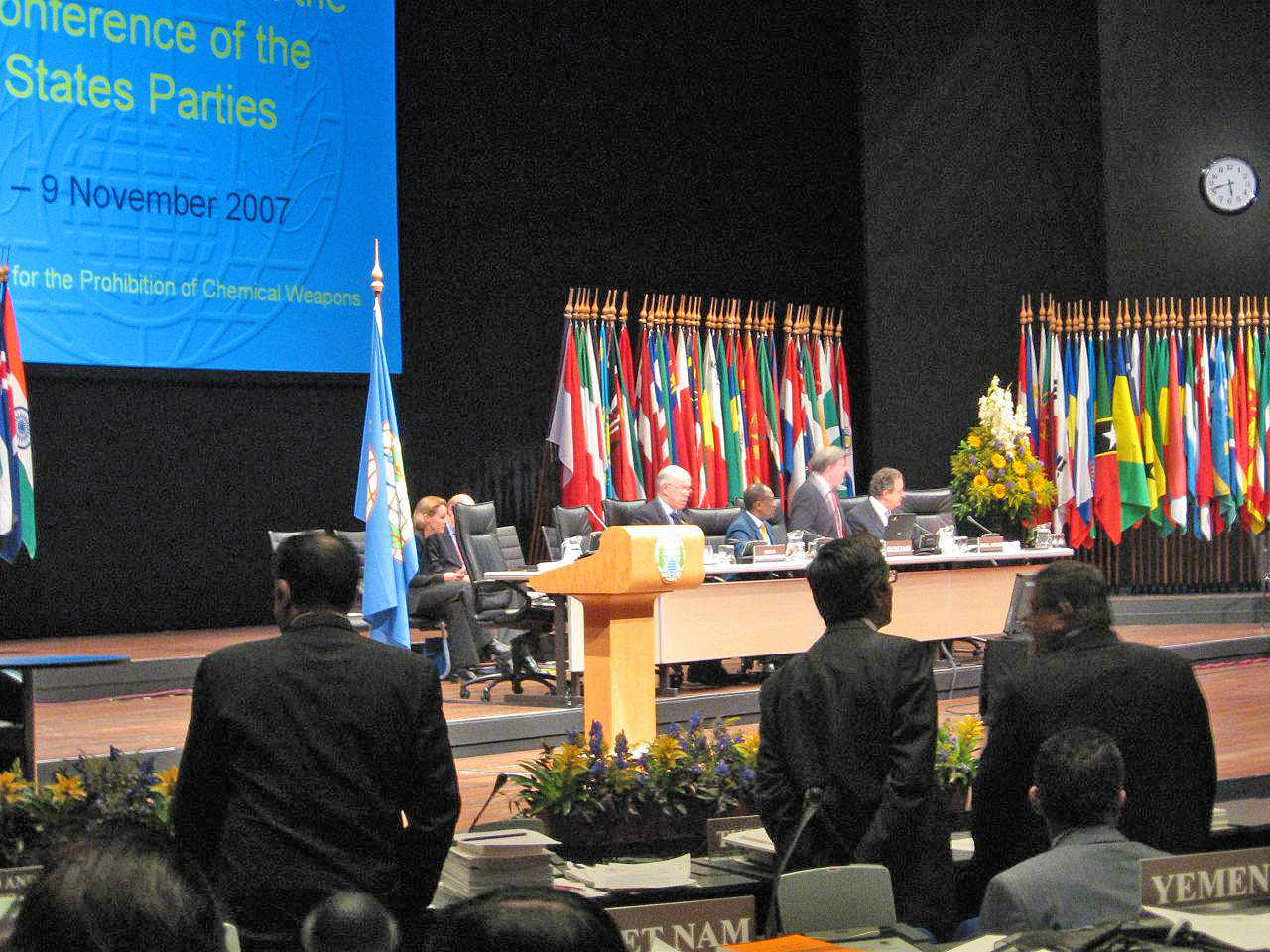 While for several weeks, all international media were expecting the young Pakistani activist Malala Yousufzai to be the next recipient, it is finally the OPCW that received on Friday October 11th the 2013 Nobel Peace Prize. Though, contrary to reckless statements by numbers of commentators, there is no reason to be surprised by this reward and even less to denounce an alleged drift from its mission. Instead, prizing this organization with the Nobel emphasizes once more time the consistency of the Nobel diplomacy.

The OPCW went effective on April 29th, 1997 to ensure compliance with the Convention on the Prohibition of Chemical Weapons, signed in 1993. Since then, its mission is to prevent the production and stockpiling of chemical weapons. It has also to verify the destruction of existing stockpiles for the states that have pledged to eliminate them, and it has to ensure that the destruction will be effectively irreversible.
Headquartered in The Hague, it now has 189 member states representing about 98 % of the world population. North Korea, Egypt, Angola and South Sudan have not signed the forbidding treaty, while Burma and Israel, on their own, signed but did not ratify. Syria, on its side, has joined the organization in September only. Since then, the country has submitted an inventory of its chemical arsenal to the international organization which has already started its mission on the Syrian territory. This is to say that the recent Nobel Peace prize currently plays a key role in the dismantling of the chemical weapons held by Syria and therefore in the ongoing conflict.

Despite often being at the heart of conflicts, the OPCW actions have remained very lightly covered. Yet, it has already intervened in many battlefields. So, since 1997, this multilateral body has conducted 286 inspection missions to 86 member states of the Convention, including 2,731 inspections related to the presence of chemical weapons. For instance, its inspectors have destroyed on several fields over 58,000 tons of chemical agents: whether in Iraq, Libya, Russia or the United States. For information, Albania and India have completely destroyed their declared chemical weapons stocks since they are part to the agreement.

For the first time in the history of multilateral disarmament, we are dealing with an institution that works well and managed to put in place highly innovative international disarmament mechanisms. Indeed, the inspectors check on site, and often at short notice, the reality of the commitment of the States, whereas during the Cold War, many treaties were signed in this area without ever being effective.

1 . The transfer of a worldwide reputation. Before intervening in the Syrian issue, especially after the 21 August 2013 chemical attack near Damascus, the OPCW was totally unknown to the general public. Yet it has been working for many years on key missions. By awarding the Peace Prize, the Nobel institution chooses to transfer the credit that it owns. It is transferring to the OPCW its worldwide notoriety that has been tied for more than a century to its international awarding system. In doing so, the Nobel Institution offers to the OPCW actions a media attention that this technical body was missing so far.

2 . The legitimacy of a diplomatic interference. Many believe that this award finally endorses Bashar al-Assad’s regime and the manipulation of the OPCW by Moscow. On our side, we will especially emphasize the Oslo Committee will, to come by high-jacking alongside the States to participate in their High Politics. In this case, he burst onto the world stage by interfering with the settlement of the Syrian conflict. By choosing to pay a tribute to collective security and multilateralism, not only it puts these concepts on the international agenda, but also it sets itself – through this symbolic power grab – as the mandatory point of contact for States, and conflict stakeholders. This way, the Nobel is able to counter this diplomatic intrusion with the entire legitimacy it has built for over a century.

For sure, it is disappointing that the young Pakistani Malala Yousafzai was not rewarded. Indeed she symbolized women’s fight against the Taliban and the fight for the right of all to education. It is equally unfortunate that Dr. Denis Mukwege, who struggles to help women victims of rape in the DRC (Democratic Republic of Congo), was not awarded a Nobel. The Congolese gynecologist dubbed “the man who repairs the women” has for nearly 15 years treated 40,000 women victims of rape or sexual violence in eastern Congo. Already fit for a Nobel last year, he had just narrowly escaped an assassination attempt in October 2012. However, there is no reason to think that these two individuals will not win this award in the future, as their profile matches the requirements of Alfred Nobel will written on November 27, 1895,and they correspond to the Nobel doxa. Yet, the Nobel Peace Prize should not however be analyzed in terms of any given moral or meritocratic criteria. There is no mistake, it is politics and it has always been about politics. More specifically, a diplomatic line repeated and strengthened prize after prize. Besides, it is how Alfred Nobel himself was conceiving it. Therefore there is no doctrinal drift in opposition to several allegations by number of comments entirely wrong.

In fact, since the Nobel jury’s choice fell on President Obama, this is less of a reward for a completed work. This is not new, this orientation has always existed. But year after year there is a confirmation that this global distinction currently serves preferably a grand ambition: to rule the world by influencing a course, by always trying to influence the direction of global issues on the political agenda. By seizing a window of opportunity, the institution sensationally burst onto the world stage – if we are to believe the bunch of criticism that goes with it – to interfere with the main current issues with full legitimacy. Isn’t it a promoter of universal values that no one would deny? It intends to use its notoriety to promote its own priorities and values, where states have shown their powerlessness so far. However, this diplomacy as innovative as interventionist, based on an interference principle is not without risks for the Nobel Committee.

By investing in an ongoing process, the institution gives a mission-order to the winner; it gives him credit and mandate to effectively complete the project which is carries.

However, if it is an obligation of result and therefore a burden for the winner, it is even a more risky bet for the Committee as it involves betting on the long-term its credibility.