Chaos International > environment > PAC 71 – The Failure of Multilateralism Without Constraints 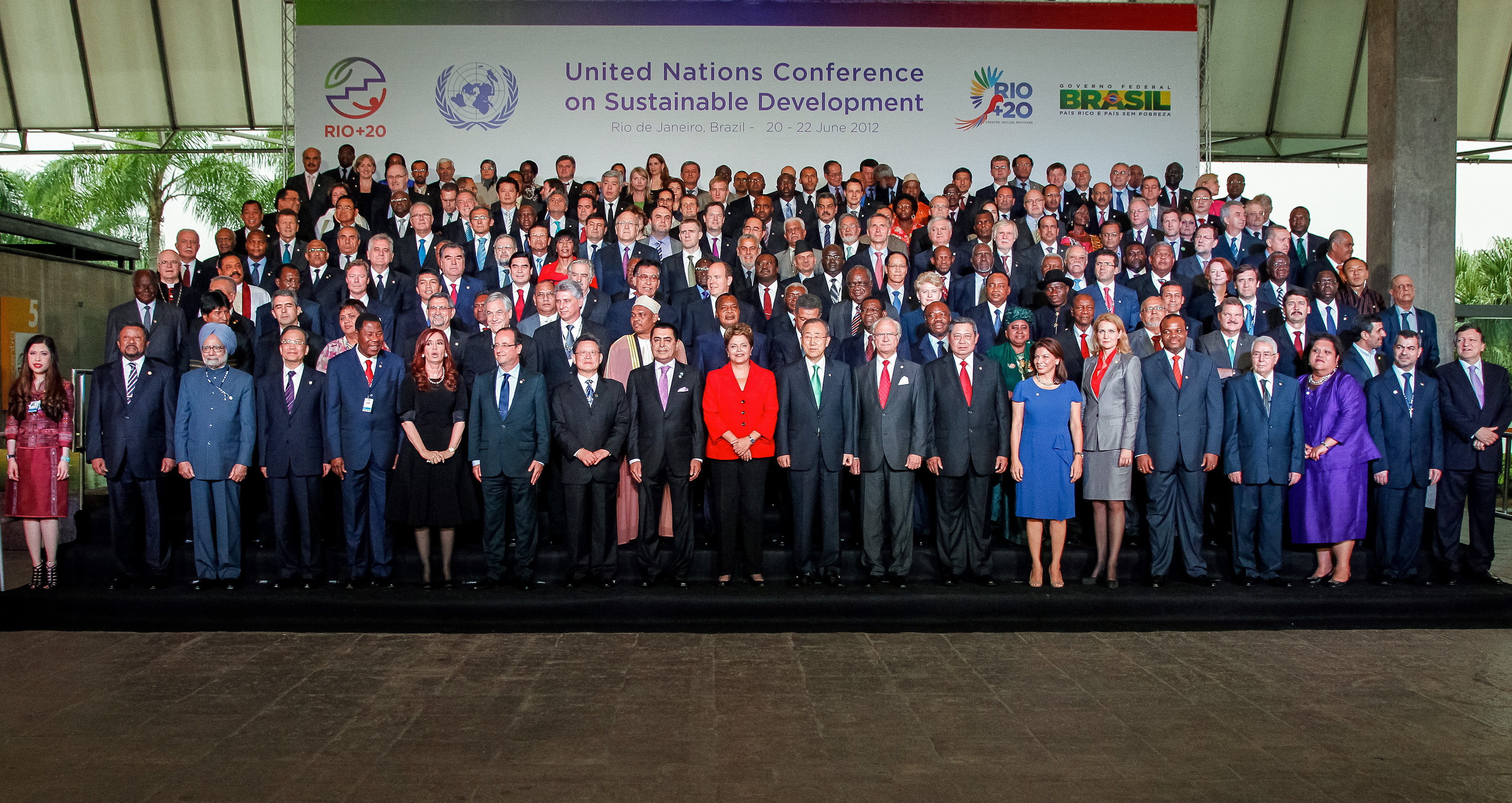 From 20 to 22 June 2012, the Brazilian metropolis of Rio de Janeiro hosted the United Nations Conference on Sustainable Development. Involving more than 40,000 participants – representing multinational firms, farmers and indigenous peoples as well as local communities, NGOs, scientists and trade unions – the Summit is said to have attracted nearly 130 Heads of State and Government. Culmination of a long phase of negotiations started in 2010, this meeting was to table again environmental issues on the international agenda and define medium-term objectives for actors involved. Many themes were addressed, from the reduction of gases with greenhouse effect to the threats to biodiversity, deforestation and uncontrolled urbanization. The conference led to the publication of a text of 49 pages entitled The future we want – with 283 points clarifying perspectives and commitments – about 700 of them – of the signatories. In addition, the Secretary General of the UN was able to put forth a success heralding the union of the private sector and civil society in order to reconcile economic prosperity and the preservation of Global Public Goods.

Note that these global meetings are held every ten years since the first United Nations Conference on Human Environment was held in Stockholm from 5 to 16 June 1972. This process of norm creation has indeed continued in Nairobi in 1982, Rio in 1992 and Johannesburg in 2002. These meetings, which yield mixed, have still made it possible to set up UNEP (United Nations Environment Programme) in 1972 and the implementation of the UNFCCC (United Nations Framework on Climate Change) twenty years later. Therefore one ought to stress the achievements of the Earth Summit in 1992, described by its organizers as a historic moment for humanity, in the awareness of threats to the environment. The adoption of Agenda 21 and the signing of two binding conventions on the fight against global warming and the preservation of biodiversity bear testimony to this progress. In 1997, the Kyoto Protocol – which came into force in 2005 – aimed at reducing emissions of greenhouse effect gases and confirmed the dynamic strengthening of international cooperation on this issue.

However, the fiasco of the fifteenth COP (Conference of Parties) in Copenhagen in 2009 was seen as a setback to the extent that the United States and China were able to block the talks. The following year, the Cancun summit has however given positive signs in terms of multilateralism, including the idea of a Green Fund to help developing countries become more involved. In this perspective, the Rio +20 Summit was managed as symbolic and decisive in the pursuit of efforts undertaken in 1992.

1. The expected wrecking of a fragmented governance. The skepticism put forth about the conference even prior to its opening shows the difficulty of negotiations in a meeting organized around the North-South gap, which seems to function a posteriori as a self-fulfilling prophecy weighing upon the actors’ expectations.
2. Green economy and the ‘commodification’ of GPGs. New avatar of sustainable development, green economy is one of the main proposals of the industrialized countries to combine environmental protection with the capitalist logic. However, this concept has been the subject of various stigmatizations from a heterogeneous coalition of protest participants.

A few hours before the opening and the arrival of heads of state and government, negotiators completed drafting the final statement to avoid repeating the mistakes of Copenhagen. Note, however, that at the beginning of June 2012, delegates had approved only a quarter of the 283 paragraphs retained thereafter. This haste seems as much to have limited the horizon of possibilities offered by the meeting as the improvisation prevailing at the 15th COP at the end of 2009. Regarding the progress of the text, many commentators heralded the introduction of OSDs (Objectives for Sustainable Development), as environmental components of the MDGs (Millennium Development Goals). However, the document was largely criticized for its shortcomings: firstly, the failure of the project of a WEO (World Environment Organization) is now obvious. Supported by the European Union, this initiative aimed at reforming the global governance of the environment, currently embodied by UNEP and the MEAs (Multilateral Environmental Agreements). Secondly, if the signatories claim the promotion of a green economy, the lack of a clear definition of this concept advocated by the North is evident. In other words, the outcome of months of negotiations proves disappointing for activists engaged in the defense of the environment.

For now, if it seems difficult to make a thorough assessment of the event, we note that the vast majority of actors had expressed skepticism in the weeks before the international conference. The unfolding of Rio +20 bears testimony in effect a diplomatic configuration stabilized around the North-South divide – the industrialized countries facing the Group of 77 and China which now has 132 members – within which Brazil has attempted to impose itself as a mediator and arbitrator. What is illustrated by this recurrent problem is the common but proportioned accountability which was again debated without clear progress. If an agreement was formalized in extremis under the auspice of the host-country, multilateralism without constraints – which had encumbered the meeting in Copenhagen late 2009 – is faced with a clear lack of leadership. In this perspective, the lengthy negotiations are more akin to a series of conflicts hastily resolved than to collaborative development of a device of a world scale. Crystallization of power relations seems to have been reinforced by the economic crisis – particularly in the euro zone – encouraging the status quo and reluctance towards any financial commitment in the medium term. Note in this respect the notable absence of Barack Obama, Angela Merkel and David Cameron, yet present on 18 and 19 June 2012 in Mexico for the G20. The interplay of the expectations of all participants takes on its full meaning, insofar as the announced failure of the Summit acts as a self-fulfilling prophecy. Clearly, the final consensus cannot be but a minima, thus formally stating the pursuit of the movement launched twenty years earlier and accrediting accusations of inaction.

Heralded by Greenpeace as an epic failure, Rio+20 has moreover stirred a number of protest rallies characterized by their heterogeneity. Thus, the petition launched by Hollywood artists and celebrities for the sanctuary of the North Pole has received extensive media coverage, with NGOs and environmental groups denouncing the predominance of economic logic in the process. In this regard, the oil producing countries, like Canada and Venezuela, have refused reducing subsidies to fossil fuels. Moreover, lobbying of multinationals was seen in the generalization of mercantile mechanisms as tools of environmental regulation, in line with the carbon markets created by the Kyoto Protocol. The concept of green economy then appears as an ambiguous compromise aiming at protecting the GCGs while making them profitable, that is to say by integrating them into the structures of domination. This critical stance has been defended by some actors in the South, foremost among them the presidents of Bolivia and Ecuador stigmatizing a disguised form of colonialism under the guise of environmental concerns. Mobilization of indigenous peoples – particularly visible in Brazil and South America, where their existence has often been threatened by development projects – have echoed this by exposing uncontrolled predation of resources to the detriment of local practices. Therefore, the preservation of GCGs is more than ever embedded in the economic order prevailing at the global level, in the absence of the reinvention of a pattern which has reached its limits.