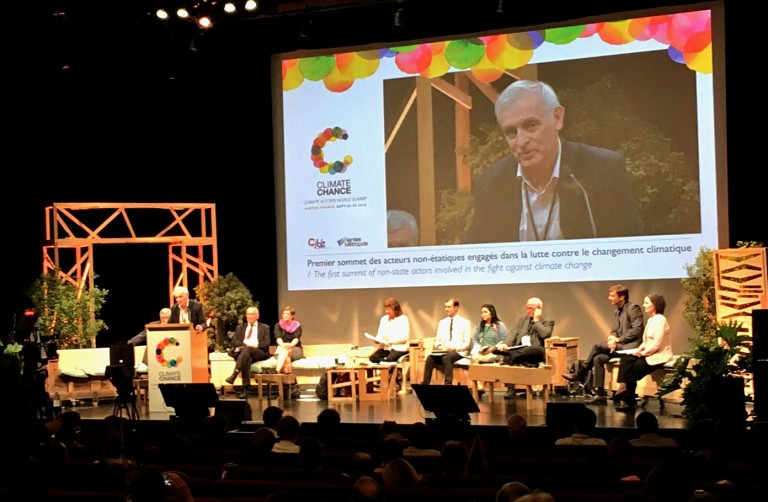 On October 5, 2016, the conditions have been reunited to bring the Paris Agreement into force, as it has been ratified by at least 55 countries accounting for an estimated 55% of the total global greenhouse gas emissions. Thirty days later, on November 4, 2016, the Paris Agreement is made effective. As a consequence, the 22nd COP (Conference of the Parties) of the UNFCCC (United Nations Framework Convention on Climate Change) reunited in Marrakech from November 7 to 18, also serving as the 1st session of the CMA (Conference of the Parties serving as the Meeting of the Parties to the Paris Agreement) is setting up the multilateral regime for climate regulation, in which non-state actors, and sub-national governments specifically, occupy an increasingly prominent role. The 1st Climate Chance Summit, held in Nantes from September 26 to 28, 2016, has been designed to assert and focus non-state climate action.

Rappel historique
The COP15 Copenhagen Summit was the deadline to reach an agreement according to the the Bali Action Plan schedule and Bali Roadmap, approved in December 2007.Twelve years after the adoption of the Kyoto Protocol, its failure formalises the end of a coercive approach and announces « a pursuit of a global redistribution of political authority », now involving local authorities. In December 2008, at the COP14 in Poznan, the UNFCCC Executive Secretary Yvo de Boer recognised that « 50 to 80% of the GHG (Greenhouse Gas emissions) attenuation measures and 100% of the adaptation to climate change initiatives are led at sub-state level ».
In the frame of international associations such as UCLG (United Cities and Local Governments) or transnational events such as the 1st Global Summit of Regions, held in October 2008 in Saint-Malo, local authorities have progressively deployed on a global scale to voice their opinion within climate negotiations. For the first time, the decision adopted at the 2010 Cancun Conference acknowledged their role in the policy of attenuation and adaptation to climate change. In the case at hand, it « recognises the need to engage a broad range of stakeholders at the global, regional, national and local levels, be they government, including subnational and local government ».

Cadrage théorique
The transnational mobilization of local authorities and their intensified relations with other non-state actors rely on two simultaneous movements.
1. A dissemination of political authority. As globalisation did not put out territorial conflicts, deep-rooted in the Westphalian system, it has however led to an increased competition between local governments. These local governments use corporate strategies on the political and economic level to gain shares in the global market. Their set of actions is syncretic and combines traditional diplomacy, except for the use of military power, with some of the typical communication and action strategies of NGOs and transnational firms. The current debates relative to multilateralism have to be re-framed and « far from describing a merely renewed interstate configuration, multilateralism refers to the emergence of a new fragmented, hybrid global governance. »
2. An international division of the climate labour. While the Kyoto Protocol only involved industrialised countries mentioned in the Annex1, so as to reduce their GHG emissions within specific proportions and schedule, the Paris Agreement engages both developed, emerging and developing countries, on the basis of their INDCs (Intended Nationally Determined Contributions). The main levers for climate action being in the hands of non-state actors – considering their field of competence (local authorities and firms) – they get to play a major role in shaping and implementing national and international strategies of climate-resilient development.

Analyse
If the Paris Agreement supports the seventh principle of the Rio Declaration (1992) relative to the « shared and differentiated responsibilities » of States, it mostly results in a shift of the paradigm of collective action, which has been boasted by the UNFCCC and fuelled by IPCC reports (International Panel of Experts on Climate Change). The normative approach developed between member States under the Kyoto Protocol gave way to « free » decentralized initiatives, organised around a global objective set up by scientific experts (control the temperature rise under 2°C before 2100 and 1,5°C if possible), this being the lowest common denominator, to such extent that some have described this process as a shift from « cooperation to coordination » (François Gemenne).
This stocktaking exercise takes place within a wider movement that has been under way since the post-Copenhagen climate turn – initiated in Cancun and made official in Paris – and that has been offering many windows of opportunity to non-state actors, and specifically to local authorities. These actors have been repeatedly asking for increased synergy – pivotal to their effectiveness – with other major multilateral agreements for development. This has been clearly stated in the declarations adopted at the end of the recent international events organised by local actors, such as the Global Summit for « Climate & Territories » in Lyon, July 2015, the 1st Summit of Local Representatives for Climate in Paris in the frame of COP21 and the Nantes Summit in September 2016. Based on human security and priority given to the recognition of collective and individual rights, these transnational texts have been acknowledged by state actors and have strengthened the legitimacy of non-state actors. Local governments, being the closest to citizen demands and expectations, are thus playing a even more important role on the global scene and specifically within the climate arena.
The Lima-Paris Action Plan (which became the Global Climate Action Agenda) and the nomination of high level champions as planned in the Part IV of the Paris Agreement attest of the Parties and UN organisation’s will to associate more closely non-state and state actors; the former’s ambition being to atomise responsibilities (and tensions), while the latter’s objective is to bolster climate commitments and results. Largely indicative of this ambition were the presence of the French champion Laurence Tubiana during the three days of the Nantes Summit and the clear support given by the Moroccan champion. They both added an official mediation channel with the national bodies of negotiation. In fact, the Nantes declaration recognised that the « mobilisation of [non-state actors] will only be efficient if closely supported by enhanced dialogue with UN bodies ».
The digital platform NAZCA (Non-state Actor Zone for Climate Action) embodies the operational side of the COP21. The platform « captures the commitments to climate action by companies, cities, subnational, regions, investors, and civil society organisations. » Over 5305 organisations, 47,7% are local authorities, on a par with private actors. This balance is also apparent in the number of commitments (on a total of 11615) but the gap increases when adopting a more qualitative focus: over the pre-2020 period, the private sector accounts for 88,6% of the initiatives against 9,8% for local governments. Provided data call for detailed analysis, but already confirm differentials of means and temporality that help understand the implementation of hybrid coalitions (water, air, international solar alliance) which used the Nantes Summit as a stage to express their point of view in the perspective of COP22. In doing so, these « interested non-Parties organisations » actively work towards a partial reconfiguration of the climate arena, which tends to bring non-state parties closer to the heart of the negotiations, while keeping them away from decisions.