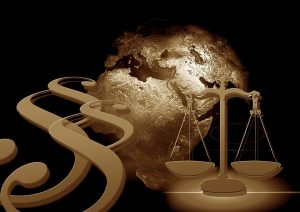 The trial of Kenyan vice president, William Ruto, began in front of the ICC (International Criminal Court) on September 10, 2013. The same will be true for the Kenyan president, Uhuru Kenyatta, on November 12. Both cases seek to judge the alleged responsibility of the accused in the post-presidential election violence of 2007. Convened October 11-12, 2013, in Addis Ababa, the AU (African Union) requested that the UN Security Council adjourn the Kenyan affair for one year (ICC Statue, article 16). Rather than putting their threat into action to adopt a resolution calling the 34 African States to withdraw, the Union preferred to take diplomatic steps to amend the Rome Statute whose 27th article provides that no official capacity – notably one pertaining to a head of State – or immunity can be opposed to the ICC.

By the authorization of Trial Chamber II, accorded on March 31, 2010, the prosecutor of the ICC opened an investigation of the politic0-ethnic violence, which resulted in the death of 1200 victims and the displacement of 300,000 persons in the Rift Valley. Six Kenyan figures accused of having committed crimes against humanity were summoned. Among them were three members of the union and reconciliation government: U. Kennyatta, Vice Prime Minister and Finance Minister, W. Ruto, Minister of Higher Education and H. Kiprono Kosgey, Minister of Industrialization. Elected president and vice president of the Republic in 2013, U. Kennyata and W. Ruto justify their democratic legitimacy and the sovereignty of the people in order to ask for modifications of the proceedings. They demand that their trial be postponed, or even closed definitively. The Court having rejected the majority of these demands, Kenya has brandished verbal threats to withdraw from the Rome Statute and has obtained the right to hold a summit of the AU on the “relationship between Africa and the ICC” in order to officially procure its support.

The originality of this case fits into a recurring theme of conflict between the AU and the ICC. This conflict is about the state’s obligation to cooperate with the Court when seized by the Security Council – or as in the present case by its prosecutor – due to the inaction of state-run justice (Statute, article 13). Moreover, the exacerbation of the resistance generated by the fight against impunity renders this case a symbolic one. In order to protect the accused from justice, their supporters toughen the critiques designed to discredit the ICC. It is this very behavior that the sitting president of the AU, Hailé Mariam Dessalegn, did not hesitate to bring into question as she rebuked the international court of leading a “racially-motivated pursuit of Africans” which the AU presented as a threat “to the current efforts aiming to promote peace, national reconciliation as well as the Rule of Law and stability not only in Kenya, but also in the entire sub-region”. More insidiously, these detractors are using their potential retreat from the Rome Statue as an instrument to put political pressure on the procedures of subsequent trials concerning diplomatic maneuvers. This strategy is challenged by numerous humanitarian NGOs – to which the emergence of the ICC owes much – as well as by African personalities. Said personalities underline the inexactitude of the accusations uttered against the Court, by specifying that it was under the influence of African states in five of eight affairs that it treated on the continent: the Central African Republic, the Democratic Republic of the Congo, Côte d’Ivoire, Uganda and Mali. They are otherwise contesting the Court’s imperialist and racist character by recalling, as Amnesty International has done, that “its prosecutor, Fatou Bensouda, is from the Gambia and that four of its eighteen judges come from African countries”. Furthermore, they are alerting the public opinion in Africa of the dangers of leaving the ICC – just as Desmond Tutu the South African winner of the Nobel Peace Prize did. Indeed, such a decision would allow certain leaders to continue their criminal activities with complete impunity, which would make Africa a “more dangerous place”.

1. The return of the Raison d’Etat. The fundamental principals defended by the ICC mark a crumbling of the National Interest which must henceforth give way to the demands of justice. However, the arguments to support the request for deferral of judicial proceedings, on the contrary, show its resurgence. Thus, they enforce the necessity to fill the constitutional responsibilities, to ensure the functioning of the state and to direct national and regional affairs. Finally, in reference to the recent terrorist attack in Nairobi, “necessary time to improve the efforts begun in the fight against terror and other forms of insecurity in the region” should be taken. Ultimately, demanding a revision of the Rome Statute (article 27), in order to restore the classical system of immunity behind which an unpunished criminality continues to prosper, remains the most symbolic indicator of the return of National Interest.
2. African States’ interest in a transnationalization of criminal justice. The AU’s aggressive decisions against the ICC cannot hide the real interest that the African states have in it. Not only are many of them members of the AU, but they are also often at the origin of the claims of jurisdiction. What is more, they offer important symbolic profits. Thus, can they present themselves as democracies that respect a universal moral, combatting impunity? Equally, do they draw considerable concrete advantages related to the intervention of international jurisdiction in the resolution of conflicts, the restoration of peace and the exercise of power? In doing so, they are offered the opportunity 1) to outsource the most political justice, 2) to take victims’ rights into account so that justice can be served and 3) to facilitate a process of reconciliation thanks to the arrest of presumed criminals and to their delocalized judgment, all guaranties for a fair trial.

In the face of different jurisdictions of the ICC, the AU adopts two different attitudes. Regarding the pursuits triggered by non-African jurisdictions, they are systemically rejected by the AU and in its wake by the majority of its member states who object to cooperation with the ICC. Thus, the warrants of arrest for war crimes and crimes against humanity (March 4, 2009), then for genocide (July 12, 2010) issued against the Sudanese President Omar al-Bashir, following the decision of the Security Council (Resolution 1593 (2005) remanding the situation to Darfur, were not carried out by the authorities of various countries to which he had paid an official visit – Ethiopia, Chad, Kenya, Malawi, Libya, Djibouti, Egypt, Zimbabwe – without being worried. In hopes of delivering him to justice, the AU has otherwise prohibited its members from cooperating with the ICC. To justify its refusal to arrest the Sudanese President, Chad has invoked the ICC’s decision and has explained that it was forced to give precedence to its obligations to the AU over those which resulted from an arrest warrant under the Security Council’s jurisdiction. As for Malawi, it has issued its own warrant by invoking an exiting conflict between the immunity that chiefs of State held on customary international law (CIJ, February 14, 2002, Arrest warrant from April 11, 2000 (Democratic Republic of Congo/Belgium)) and the request of the ICC (founded on article 98-1 of its statute) to arrest and turn over to the Court a head of state currently in office. The same hostility can otherwise be observed in the case of the arrest warrants delivered against M. Gadhafi, June 27, 2011, and certain members of his inner circle, for crimes against humanity (murders and persecutions that were allegedly committed in Libya), under the jurisdiction of the ICC by the Security Council on February 26, 2011. (Resolution 1970 (2011)). However, this did not lead to conflict, due to the death of the Libyan leader.

On the other hand, the situation is completely different for the claims of jurisdiction made on the initiative of authorities of the states concerned – RDC (Situation in the region of Ituri in 2004), Uganda (referral in 2003 on the situation concerning the Lord’s Resistance Army, in the North of the country), the Central African Republic (Crimes committed after 2002), Ivory Coast (post-election violence in 2010-2011), to whom the AU has not shown any particular hostility in any matter. In a well-understood logic of interest, the states involved are, on the contrary, cooperating with the Court throughout each stage of the proceedings. In the Kenyan case, where the accused were reconciled and hold power together, the absence of a clear winner and the alleged abuse by both camps makes cooperation with the ICC, which ultimately imposed its own jurisdiction, contentious. This explains the use of the old argument of National Interest destined to escape from justice. Nonetheless, it is unlikely that they be strong enough to guarantee the immunity of former times for those that would claim it.