PAC 149 – The Famous Traders of Philanthrocapitalism The Clinton Foundation Controversy 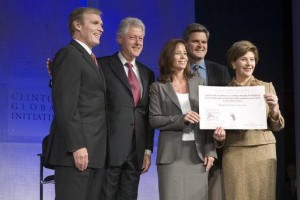 Donald Trump’s victory in the 2016 US Presidential elections marks the end of a particularly fierce and conflictual electoral campaign. As a matter of fact, the campaign of its rival Hillary Clinton has been stained with various controversies, such as the email affair – related to the use of a private mailbox server when she led the US State Department. Fuelled by computer hacks targeting the DNC (Democratic National Committee) and relatives of the Democratic candidate, the WikiLeaks website published several thousand files during summer 2016. These leaks sustained the controversy on the Clinton Foundation – which became, in 2013, the Bill, Hillary and Chelsea Clinton Foundation – and was criticised by Republican detractors for its fundraising techniques. But these issues had been expressed as soon as 2008, when Hillary Clinton was about to step up as secretary of State in the Obama administration. In spite of signing a Memorandum of Understanding to prevent any conflicts of interest, the ex–Senator of New York evolved within an unprecedented power configuration. In these conditions, the Foundation has been summoned in various proceedings and is also said to be under investigation from the FBI (Federal Bureau of Investigation) according to the Wall Street Journal.

Historical background
Legally established in 1997 to manage the building of a museum in Arkansas, this philanthropic organisation is closely related to the post-presidential career of Bill Clinton. In January 2001, he stepped out from his second mandate at the White House, tainted with the Lewinsky scandal. Since then, the former head of State tried to clear his name through intense public activity. While supporting his wife career, Bill Clinton has been involved in the humanitarian response to Aceh – destroyed after the tsunami of December 26, 2004 – and also in the rebuilding of New-Orleans after Hurricane Katrina struck. These multiple commitments have been supported by the continuous mobilisation of faithful young collaborators such as Laura Graham or Douglas Band, and well-established advisors, of which Bruce Lindsey or Ira Magaziner. They led the development of the Clinton Foundation which quickly became a world-renowned brand.

The institution won its credentials with the launch of the CGI (Clinton Global Initiative) in September 2005. Each year, this flagship project reunites several international leaders – national Heads of State, artists and businessmen – on the sidelines of the United Nations General Assembly. Very popular amongst the media, this meeting – with a quite expensive admission fee – consolidates a powerful network of donators. This network includes governments – from Saudi Arabia to Norway – but also billionaires – such as Carlos Slim, Rupert Murdoch or Denis O’Brien – and Hollywood stars. CGI members are invited to commit to innovative projects from social engineering to mercantile rationality. The sudden development of the Clinton Foundation can be measured in terms of human resources – more than two thousand employees in thirty countries in 2016 – and also in financial terms. A recent inquiry from the Washington Post revealed than more than 2 billion dollars were received as donations between 2001 and 2015, from which only 262 millions for the sole year 2013.
.

Theoretical framework
1. A philanthropic coalition built on the Clintons’ political capital. The Foundation acts as an intermediary – a broker – between various worlds: the international business community, UN bodies, the diplomatic arena, the show-business industry and the non-profit sector. In this line, it supports lucrative, charitable projects with significant media potential, while the Clintons’ reputation benefits from their expected success.
2. The opacity of a structural overlapping. The differentiation of positions – and mainly, the distinction between public and private – appears to fade within this system of contributors exchanging physical and symbolic goods. This ambivalence, maintained on every level, raised suspicions while Hillary Clinton unveiled her presidential ambitions.

Analysis
The Clinton Foundation has been active in the United States and around the world, on a wide variety of topics including public health, women’s rights and climate change. This vast mission has been declined through a myriad of autonomous programs, such as the CHAI (Clinton Health Access Initiative). The organisation has adopted the smart power doctrine, as promoted by Hillary Clinton in the Senate, and advocates an approach based on innovation, flexibility and outcomes. Contrary to traditional methods, the Foundation seldom funds other actors and leaves aside operational activities, focusing on upstream negotiations to foster partnerships, specifically with transnational firms. To such extent that an article of the New York Times has described the Foundation as a global non-profit consultancy exploring new markets in the Global South for the interest of its donators. The sharp price decline of several medical treatments stands among one of its indisputable successes – such as antiretrovirals in Rwanda – obtained through agreements ensuring steady joint orders to pharmaceutical laboratories. However, these methods have also failed, as exemplified through the efforts put in Haiti and especially in the industrial park of Caracol, after the earthquake of January 12, 2010.

Beyond this mixed picture, the philanthropic entity raised even more concerns when Hillary Clinton led the United States foreign policy between 2009 and 2013. Numerous pundits pinpointed a pay-to-play situation, where special access to the government bypassed traditional channels of institutional lobbying. Some donations would not have been declared, such as a contribution of half a million dollars allocated to the Haiti humanitarian crisis by the Algerian government. Several media have also objected to the commercial operations of one of CGI’s major funders, Canadian billionaire Frank Giustra. Moreover, the Swiss bank UBS would have increased its contributions to the caritative organisation after the settlement of a litigation with the IRS (Internal Revenue Service) under the patronage of Hillary Clinton. On the way to the 2016 Presidential election, these elements have been reported by the Wall Street Journal and ultra-conservative website Breitbart News, also known to have published the damning book Clinton Cash. Notwithstanding the suspicions of self-enrichment – as paid lectures would have represented a profit of several dozen million dollars to the Clinton family – this partisan offensive aims to describe a corrupt system of elites standing at the top level of the Federal State.

Facing these allegations, the Foundation only reaffirmed its political neutrality while some of its champions, such as economist Paul Krugman, stigmatised an unfair ideological bias against public personalities. If no smoking gun has yet been found, internal tensions seem to have maintained a chronic lack of transparency. From 2011, the rise of Chelsea Clinton within the organisation has met opposition from one of the historical partners, Douglas Band. Initiator of the CGI, he has been accused of requesting payment from Bill Clinton and has been said to use this privileged position to develop his own consultancy firm Teneo,. Such methods are widespread within Hillary Clinton’s circles: her relatives, BlackIvy  Group creator Cheryl Mills and Huma Abedin have simultaneously occupied positions within the federal administration and the Clinton Foundation. Beyond the extreme polarisation of the electoral campaign, this structural porosity may reveal a complete overhaul of the boundaries of the political field by elites. A philanthropic facade cannot conceal such a power reconfiguration, ultimately sustained by an entanglement of powerful interests.