PAC 144 – Asylum: a Questionable Externalization by the EU The European Union-Turkey Agreement 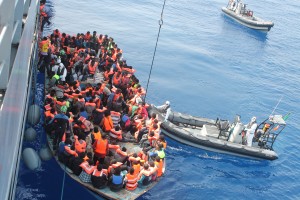 On April 4, 2016, the agreement between Turkey and the European Union took effect. It complements a series of bi and multilateral treaties that the European Union has signed with its Southern neighbours, transforming them into border guards for Europe. In return, offsets are granted, such as visas for the qualified, infrastructure construction or development aid. But this document appears to scale up operations. As of 2014, Europe has been surrounded by countries in turmoil, plagued with civil wars, both in the South-Mediterranean rim (Libya, Syria, Iraq) and in the Horn of Africa, from which flew streams of asylum seekers of unmatched magnitude. The same applies for the South. In 2015, 1 255 640 000 migrants filed for asylum in the European Union and 625 000 in 2014, when previous peaks (in the early 1990s, in the aftermath of the fall of the Berlin Wall) only reached 500 000 annual requests; with an average volume of 220,000 per year for the other years. Unlike the Arab revolutions, which, since 2011, had induced small flows to Europe (Tunisia, Libya, Egypt), nobody had anticipated the Syrian regime would stay in place. Nobody had imagined that 4,7 million Syrians would leave their countries to seek shelter in Turkey (2.7 million are currently living there), Jordan (600,000), and Lebanon (1 million), the rest trying to cross the Greek border to seek asylum in Europe.

Historical background
As a State party to the Geneva Convention on Asylum (1951), Turkey has however retained its geographical reservation to Europeans only, non-Europeans not being allowed to benefit from UN asylum, unless directly issued on-site by the UNHCR. The Syrian families who left their country have been welcomed in Turkey. They seek to stabilize their status, access the labour market and attempt to cross the Greek-Turkish border. According to the UNHCR report (United Nations High Commissioner for refugees 2015), the majority of Middle-Eastern asylum-seekers indeed came through Greece, Italy only in second place for other migrants and refugees. Two routes are possible: by sea, through smugglers or by land, crossing the Evros river, then Thrace and through the Balkan route. Early September, the picture of the three year-old Syrian child Aylan Kurdi, found dead on Bodrum’s Beach as his parents drowned in an attempt to reach Greece by sea from Turkey, moved millions. At the same time, Angela Merkel’s announcement, declaring Germany ready to welcome 800 000 asylum seekers, was only cautiously relayed by the other Western European countries. They were also slow to give a positive answer to President of the European Commission Jean-Claude Juncker, which had proposed resettlement quotas to European countries based upon their wealth and the size of their population. Therefore, France agreed to welcome 30 000 asylum seekers over two years in addition to regular requests. In 2015, the number of these asylum requests amounted to 79 000 requests. But few Syrian asylum seekers wished to go to France as many had ties with Turkish migrants who settled in Germany a long time ago. Moreover, the deterrence policy and the difficulty to access the labour market for asylum seekers in France did not make it an attractive country. A dividing line also appeared between Eastern and Western Europe, as European countries of Central and Eastern Europe – the so-called Visegrad countries – showed hostility to hosting refugees from Middle-East countries and of Muslim culture; a series of reactions fostering a sharp rise of the extreme right.

Theoretical framework
1. Asylum: a failure of the deterrence strategy and of European solidarity. Despite 25 years of militarization and control of borders, the influx of refugees has continued to grow over these past two years, comforting the role of non-State actors such as people smugglers. Facing a divided Europe, European countries have sought to outsource border control to non-EU States (return agreements for failed asylum seekers) often bilaterally. They sometimes entrusted the sorting of asylum seekers to those countries, now regarded as safe by the European Union. This reveals the lack of confidence of the European Union countries in the EU border control mechanisms. This reflects also a lack of solidarity between Member States of the Union regarding the treatment of asylum. Some countries such as Germany showed great generosity. Others, like Hungary, have purely and simply refused to host any refugees, fearing their ideal of ethnic and identity homogeneity might be threatened.
2. From advocating sovereignty to the temptation of isolationism. The States of the European Union and those of the Balkans seek to return to a national border control and to close them. In doing so, they deliberately ignore the Schengen mechanism, which establishes freedom of internal movement throughout the European territory. Is the Schengen system threatened by the refugee crisis? Some fractions of the extreme-right advocate a return to national border control by the States, dismissing the fact that international trade, cross-border work, tourism would then be severely stricken.

Analysis
The European Union chose Turkey to conclude such an agreement in order to alleviate the burden of arrivals in Greece, which is currently experiencing a major economic crisis. The idea is to transfer to Turkey a major part of the hosting responsibility, but without providing any right to asylum, as set by the Geneva Convention. The second answer lies in the European attempt to put an end to the smugglers’ trafficking in the Aegean Sea, after the European attempt to make war to smugglers (and migrants) proved not feasible. Indeed, how is patrolling to remove small boats in the Mediterranean Sea possible, without any intervention mandate neither from the countries of departure nor from coastal countries? The third response is related to the concern of the Turkish Government to foster a positive image in Europe by signing this text. Turkey’s claims in return for hosting Syrians may be outlined as such: 1) Re-opening the negotiations relative to the accession of Turkey to the European Union. 2) Abolition of visas for Turks coming to Europe as Turkey presents today a negative migration balance for Europe (there are less Turks going to Europe and Turks of Europe returning to Turkey). 3) A payment of 6 billion Euros over two years to host the Syrians. Associations have expressed strong objections to this provision as it recalls former agreements between Libya and the European Union. Let’s remind that this country, long banned from the international scene, regained some European respectability (especially facing Italy and France) because it had accepted to sort sub-Saharan asylum-seekers travelling to Europe, in exchange for gifts granted to president Gadhafi: payment of substantial sums of money, development programs and infrastructure construction. For Turkey, the agreement is rather focused on a “one for one” swap. For each Syrian repatriated by Ankara at the request of the European Union (as failing to meet the refugee profile), another would be relocated to the European Union within the limits of 72 000. In early April, European countries were about to implement this very strange bargaining, with the assistance of Frontex, the European Agency for the Management of the External Borders of the European Union, with NATO contributing to interceptions in the Mediterranean Sea.
However, United Nations Special Representative on international migration Peter Sutherland expressed reservations on this potentially “illegal” agreement. In addition, the effectiveness of such an agreement is not guaranteed, as migrants will try out other routes than the Greece-Turkey road, paying a fortune to other people smugglers. Such a provision would thus enable Greece to forward inadmissible asylum requests to Turkey. But associations challenge the classification of Turkey as a safe third country. Finally, the agreement applies only to Syrians, when more than half of the refugees entering Greece are Afghans or Iraqis.
People smugglers will have to reorganize other routes that do not cross the Aegean Sea. However the path of the Balkans also appears arduous. Indeed, many transit countries in the region have closed their borders, such as Macedonia. 30,000 people have died in the Mediterranean since 2000 and 3000 in the year 2015 alone. In 2016, 351 deaths have already been registered, an issue met with indifference amongst European opinions. This agreement, which outsources asylum to a non EU country – conveniently considered for the occasion as safe – is in breach of the non-explusion principle enshrined in the Geneva Convention. Regarding the treatment of immigration and asylum, the agreement also puts to the test values of solidarity between European countries but also Human Rights, on which Europe has been built.