PAC 77 – Nobelisation Oblige! The Nobel Prize for Peace 2012 Awarded to the European Union 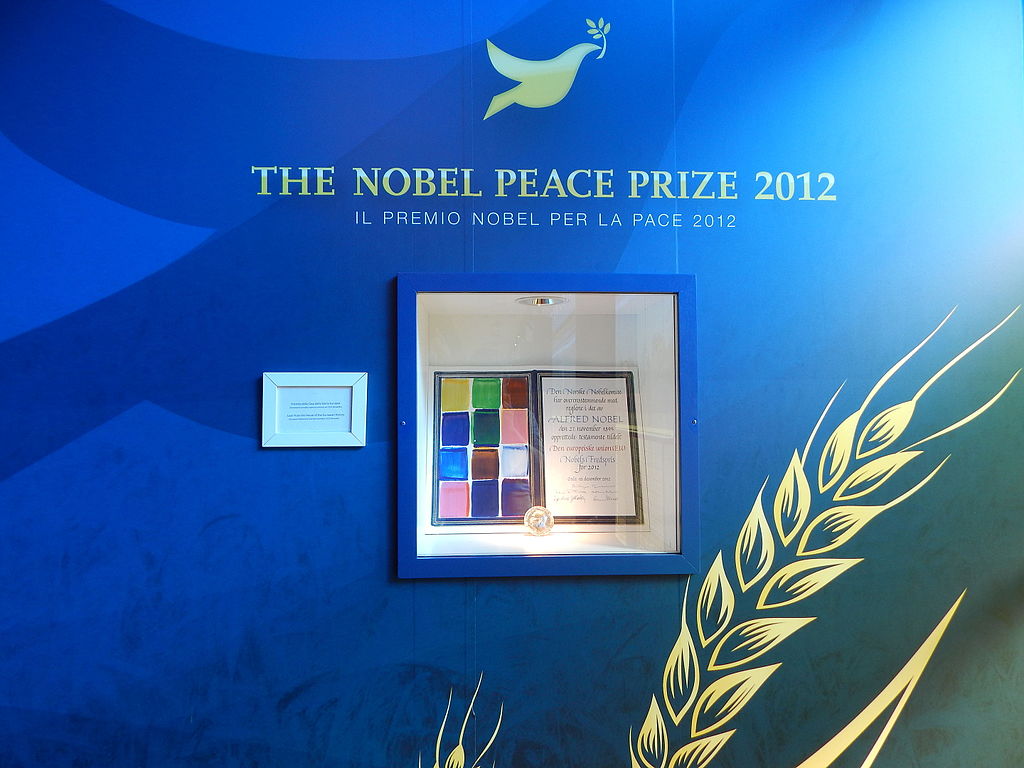 On Friday 12 October 2012, the Nobel Peace Prize was awarded to the European Union. The Chairman of the Nobel Committee, Thorbjorn Jagland, stated in his proclamation speech that “The EU and its ancestors have contributed for more than six decades to the promotion of peace, reconciliation, democracy and human rights in Europe”.

In his will of 27 November 1895, Alfred Nobel, the Swedish chemist, industrialist and philanthropist, laid the foundation of an international system of rewards that was to be resolutely pacifist and cosmopolitan. His will comprised the creation of five annual prizes 1- all of which must equally contribute to pacifying the world stage – Physics, Chemistry, Physiology-Medicine and Literature – as well as a Peace Prize whose attribution he required be entrusted to the Norwegian Parliament (the Storting). At the time, this will aroused a deep disapproval in Sweden because Norway was then placed under the authority of Stockholm. But the activity which the Storting had already deployed in favour of peace appeared to the inventor of dynamite more important than the conflict within the Union between Norway and Sweden. A liberal and a democrat, Nobel thus expressly designated this Chamber to manage the awarding of this prize, believing that it was the best qualified and most legitimate institution. Since 1901 and the awarding of the first prizes, it is therefore a committee emanating from the Norwegian parliament in Oslo that rewards an individual or an organization which has worked particularly in favour of peace. Paradoxically, it is in Norway, one of the most Euro sceptic countries today that this prize was awarded to Europe.

As regards the prize for peace, the Swedish philanthropist did not indicate specific selection criteria. He simply outlined three main directions: “One must have worked for fraternity among nations, for the abolition or the reduction of armed forces and for the holding and the promotion of peace conferences”, he wrote. However, we can distinguish four ideal-types of recipients who participated in the development and implementation of a Nobel diplomacy. 1) Pacifist and humanitarian activism. 2) Peace through law. 3) Missionary Volunteering. 4) Expertise at the service of peace. However, obviously, the Nobel Prize awarded to the European Union does not enter into any of these categories. Yet, these have structured, for over a century, the policy of awarding the Nobel Peace Prize. How then is one to analyze this nobelisation?

1. Performative authority. We owe the concept of performative utterance to the linguist Austin. Unlike a descriptive statement such as “it is raining”, a performative utterance generates practical effects as it holds in itself the possibility to alter reality due to the institutional status of one who produces it and as a consequence due to the authority it has.
2. A window of political opportunity. This term, coined originally by John Kingdon, refers by analogy to the idea of a “window of opportunity”, a very special situation. Indeed, a situation that appears – at some point – conducive to the attainment of a political action. It represents the relevant sequence which allows taking measures that would have no chance to exist otherwise.

This policy of allocation of the Nobel prizes has sought for over a century to contain the brutalization of the world. In doing so, it is at the origin of a coherent diplomacy by which the Nobel system intervenes globally on the world stage to impose the irreducibility of values such as freedom or democracy. Let us recall that the Nobel system is a comprehensive one that has developed over time, a non-state diplomacy which has created supports, protects and enshrines certain political processes in order to uphold its priorities and agenda on the world stage. In this case, we are dealing with an innovative diplomacy that designs norms and gives itself the means to deal with international issues considered as priorities. There also appears as an interventionist diplomacy which interferes when applicable into the internal affairs of States or into inter-state relations, regional and international disputes. Finally, an unusual diplomacy is affirming itself, powerful enough to now be able to exercise a performative authority. Therefore, why wondering that it seeks to get involved in the issues of the century by nobelising the European Union?

Because this diplomacy seeks to state the forms of the future peace, it irrupts more and more frequently into High Politics, thus determining a new mode of enunciation politics. The institution and its awardees consider themselves, in this respect, as the strongest defenders of human rights against the Raison d’Etat. By coming across as a universal power of criticism, they intervene more and more often in the international arena, whether addressing societal issues or managing more directly political issues. In doing so, they do not hesitate to interfere in the internal affairs of States or to engage in international regulations. They then deploy their actions in all directions to promote a policy which they label in the name of knowledge or common property of which they proclaim themselves the guardians.

With this award, a new doctrinal line appears that confirms the grandiose ambition which had already been sketched in 2009, when awarding the Nobel for Peace to President Barack Obama. Nobel diplomacy is indeed now powerful enough at the symbolic level to be able to exercise performative authority. In this case, the question is not whether the European institution deserves or does not deserve the prize since we are no longer there in the register of moral and good sentiments, but clearly in that of politics.

Admittedly, by nobelising the EU, the Committee has rewarded an already-achieved trajectory of peace. Similarly, it wanted to encourage and support the Union by giving it a significant trump card in the face of current difficulties and criticism. The jury thus underlined that the prize was purposefully awarded to a Europe in crisis and “experiencing severe economic hardship and social unrest”. With the Nobel and all the decorum associated with it, the Committee chose to distinguish Europe among other potential recipients in order to confer greater legitimacy worldwide. Therefore, the European Union is now the custodian of Nobel aura and values. The EU bears a project of universality that transcends it and embodies the Nobel diplomacy instead of simply being the architect of the European construction. At a time when it is so criticized and weakened, this is a political bias in its favour that is clear and simple. In this regard, this choice corresponds very closely to the designs of the great European who Alfred Nobel was, because it is a symbolic and political investment that adds credentials to the integration process. Naturally, this also constitutes a risk since the Nobel system commits all of its credit, both symbolic and institutional. In the near future, this symbolic coup could for example make it easier for the EU to claim a seat on the Security Council of the UN. Also, this nobelisation gives the EU additional authority to restore social peace in the Member States tempted by a lesser communitarism and by populist discourses, as it implicitly points to public opinions, prone to be forgetful, all that the European construction has brought them. Finally, it gives the Union a valuable symbolic resource at a time when there is talk that the ECB support the mechanisms of stability and of financial solidarity, common budgetary surveillance, and soon the Banking Union, or even a budget designed to relaunch growth for the Euro zone. In short, at a time when Europe is on the verge of becoming an integrated federal entity, the Nobel diplomacy seized a window of political opportunity to order the world by norming Europe. In other words, the prize is far from being a mere reward. It is more clearly a marching order through which the EU is mandated by the Committee to effectively accomplish and carry institutionally everything on which the EU has been engaged up till now. That is why this Nobel can be read in many ways, as a burden, an obligation of result by which the Nobel institution commands the Union to at last realize the European dream: nobelisation oblige !

1. In order to more accurately perpetuate the concerns of A. Nobel, the Bank of Sweden has founded in 1968 – on the occasion of its tercentenary and in the Memory of Nobel – a sixth prize: that for economics. Awarded since 1969, it still however seems singular because it is the only Nobel that crowns a social science. It is even to this day the only internationally determinant distinction in this field of research.