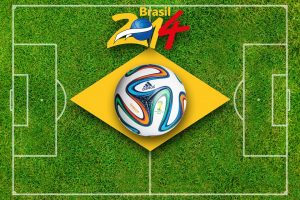 While the 20th edition of the World Cup will be held in Brazil between June 12-July 13, 2014, the institution in charge of its organization, FIFA (Fédération Internationale de Football Association), appears more criticized than ever. Indeed, this powerful entity has managed to impose drastic conditions on the host country, loaded with socioeconomic, even human, consequences.

Created in Paris on May 21, 1904, by the representatives of athletic associations from 7 European countries (Germany, Denmark, Spain, France, the Netherlands, Sweden, Switzerland), FIFA aimed to regulate the practice of a sport, association football, which at that time was in full expansion. Besides the guarantee of rules and the recognition of national federations, this authority sought to organize its own international competition.

Despite the first promising steps and the rapid integration of new members, it wasn’t until 1930 that the institution organized the first World Cup, in Uruguay. But in a context of economic crisis and of resurgence of international tensions, the event was not an immediate success. The primary European football nations (England, Germany, and Italy) were still absent from the list of participants, while only thirteen teams took part in the tournament. Rapidly however, the political power measured the symbolic impact of the competition and the international prestige that it could glean from it. Beginning in 1934, by hosting the FIFA World Cup, Benito Mussolini’s Italy managed to make the tournament into a showcase of its supposed grandeur. Pretentious staging conjugated with resounding success of the national team allowed the fascist regime – on the eve of the eruption of the Second World War – to offer the world a glorified image of power and modernity.

However, it wasn’t until the advent of television that the political and economic stakes surrounding the competition, took on their full dimension. Sixty million viewers watched the first live broadcast of the World Cup final played in London in 1966, which opposed the Queen Mother to the West German Mannschaft. From that moment on, the World Cup became a platform for the exhibition of commercial brands. Also, beginning in the 1970s, the sport authority under the direction of the Brazilian businessman João Havelange, concluded its first contracts with the large companies Coca-Cola and Adidas, which since that time have remained its constant partners. The story of the institution then became that of an irresistible rise to power. Seizing the entirety of the rights which emerged with the quadrennial tournament, (broadcasting rights, marketing rights, multimedia rights), FIFA recorded constant progression of its earnings. For example, during the period 2007-2010, its profit culminated at 4.2 billion dollars. At the same time, the global football authority did not cease to extend its political influence by managing to impose ever more strict conditions on states in regards to the organization of the flagship competition.

1. International intrusion of a private agency. Mobilization leads to a redistribution of political authority, which confirms the rise in importance of non-state actors. Private authorities such as FIFA establish themselves in the regulation of transnationalized sectors and manage to thwart, even to divert the action of states on their territory.
2. Reconfiguration of state power. In so doing, these new actors contribute to the transformation of the forms of state power. In this, it is clear that under the orders of FIFA, the Brazilian government renounces the realization of significant regulatory functions, while it considerably reinforces its security prerogatives.

The World Cup bestows on FIFA a characteristic of considerable power, which allows it to impose itself as an autonomous actor on the international scene. Certainly, this institution, contrary to intergovernmental organizations, holds no delegation of sovereignty. In reality, the supreme football authority only constitutes a federation of national athletic associations; as such it does not maintain direct links with states. However, by putting them in competition for the title of World Cup Champion, it manages to impose organizational conditions on them, which involves renouncing a significant part of their independence. Thus, FIFA succeeds in exerting its control on the wealth produced within the borders of these states. Indeed, for this edition of the World Cup – as for the two preceding competitions in Africa and in Germany – the host country accepted tax exemption on the all of the earned revenues by the sports authority and its commercial partners during the entire World Cup. Besides that, to the detriment of local economic actors, FIFA has imposed a series of measures promoting the activity of its sponsors. For example, the international federation has obtained from the public powers the installation of a zone of exclusivity around the stadiums that is strictly reserved for the sale of official brands. Pre-empting the state on this point, the authority protecting football seems able to dispose of a significant amount of the revenues generated by the event. All this to say that the aptitude of the state actor to play its role of social regulator is put into question. In these conditions, the growth of public deficit brought on by expenses dedicated to the World Cup (11 billion dollars) runs a strong risk of eventually compromising the government’s capacity to invest in social policy. From now on, the executive has planned for a program for the reduction of budgetary expenses, which – despite the demands expressed by protestors – could ultimately harm public services. In the same way, its aptitude to ensure democratic regulation is proving to be compromised. Indeed social movements show that public authorities are ready to move outside consultation procedures. Still, if Brazil gives up a significant part of its sovereignty under FIFA’s pressure, it will not remain deprived. On the contrary, in a common accord with the coordinating authority of the World Cup, it is considerably reinforcing its security prerogatives and therefore increasing its control over the population. Thus, claiming the organization of the World Cup, the Brazilian government extends its police and judicial powers. Let us recall that it invested nearly 2 billion reals (900 million dollars) in material, surveillance equipment and special intervention troops, while the authorities have normalized the use of the military in order to quell protests. In parallel, the General World Cup Bill of Law negotiated with FIFA representatives, added new crimes and misdemeanors to Brazilian penal code. Finally, even more preoccupying in terms of public liberty, congress is currently examining an anti-terrorist bill on the acceptance of a wide notion of terrorism, notably comprising the deterioration of goods and services. This could lead to fear of an abusive recourse against protestors, which would disrupt World Cup play. Ultimately, these developments promote a climate of impunity specific to the exacerbation of police violence. In this respect, numerous NGOs are denouncing the growth of excessive demands imposed by police forces during protests. They are condemning the offensive models put into place in the expulsion of residents of favelas located near tourist centers. But it would be wrong to envision the relationship between the Brazilian State and FIFA merely on the level of opposition and competition. In reality, the governing body of football is managing to cause the public power to fail in its constitutive elements such as the control of wealth, redistributive functions or democratic regulation. However, these two institutions are equally linked in relationships of alliance and partnership. Indeed, they find a common interest in the hardening of power, while FIFA strives to maintain order for the smooth execution of its World Cup, the state is treating deep problems with force whilst Brazilian society bears witness to it, such as the existence of favelas or social demands. From now on, it seems that this new actor in international relations contributes less to the surrender of state power than to its security development, even to its “brutalization”.