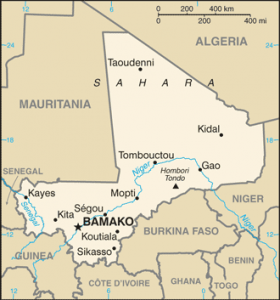 The looting of Muslim shrines perpetrated in Mali in 2012 by religious extremists has raised consternation of global proportions. However, after this unanimity without effect, it is important to examine the specificity of the common goods of a cultural nature that requires a renewed governance.

On May 4th 2012 the graves of Timbuktu – classified by UNESCO as World Heritage of Humanity –are destroyed by Islamists who consider the cults of Muslim saints contrary to the fundamentalist Islam they claim to ascribe to. These abuses have continued despite these monuments being declared as Heritage in Danger and despite the condemnation of these acts by many countries and international organizations such as UNESCO and the International Criminal Court.

Northern Mali, including the cities of Gao, Timbuktu and Kidal, has been occupied for several months by armed gangs, which came into rebellion on January 17th, 2012. The latter consisted of a motley alliance of Islamic movements such as Eddine Ansar, AQIM (Al Qaeda in the Islamic Maghreb), and MUJWA (Movement for Unicity and Jihad in West Africa), as well as some Tuaregs form the NMLA (National Movement for the Liberation of Azawad), ousted from the coalition shortly afterwards.

To achieve territorial conquest, the rebels relied on the particularistic claims of indigenous populations and on the revenues of traffics combined with the vacuum of the State in the region and with chaos in Libya. They were then able to make quick advance through the dislocation and mutinies within government forces in Bamako.

1. The peculiarity of certain common goods. Unlike global public goods, cultural goods may be subject to rivalries and are characterized by their non-exclusivity. With the process of globalization, they cover more and more areas including culture where they are doubly threatened. They undergo behaviors of “free-riders” (Mancur Olson) and sub-optimal logics of self-interest (Garrett Hardin). As evidence of cultural diversity and as expression of a universal community in the making, they symbolize a vision of the world which many economic, social and religious actors do not share and even oppose.
2. Inadequacy of institutions in post-Westphalian times. International organizations are obsolete in “post-Westphalian” times (Richard Falk). The process of globalization that currently undermines the state system established by the Treaties of Westphalia (1648), leads to a compression of space-time (David Harvey), an ever higher interconnection (David Held), a dissemination of authority (Susan Strange) along with a plurality of spheres and global actors (Philip Cerny). The preponderance of non-state and identity violence as well as the emergence of territories beyond any political structure, reflect the interstate inability to resolve global issues. In other words, it cancels all proceedings based on sovereign States.

Presupposing the existence of a proto-community of planetary order, International Relations theorists have formally considered the legal and institutional mechanisms with a view to global governance (David Held). In this regard, common goods of a cultural nature refer to the substantive definition of the latter. Also, the Convention for the Protection of the World Heritage, adopted on November 16th 1972 under the auspices of UNESCO, recognizes “the outstanding interest which requires the preservation of [some goods] as part of the World Heritage of all mankind [and] the importance which represents, for all the peoples of the world, the safeguarding of these unique and irreplaceable goods, whatever people they belong to 1 “. In March 2012, 189 States had ratified 774 artifacts classified in this list. The Ad Hoc Committee stated in its Global Strategy that it wants a classification that better reflects “the diversity of cultural treasures […] of our world […] recognize and protect sites that are exceptional evidence of interactions [. ..] among human beings, of cultural coexistence, spirituality and creative expression 2”. Thus, this patrimonial policy induces a recognition of universal values and of common goods on a human scale. However, integrating transformations are accompanied by a fragmentation that causes the return of Manichean logic and identity and religious tensions. Destructive madness manifested in Timbuktu, “the city of 333 saints”, provides an illustration.

Responsible for “ensuring the identification, protection, conservation, presentation and transmission to future generations of the cultural and natural heritage”, states play a central role in dealing with fully global issues 3. This state-centered vision is based on the realistic hypothesis that they remain capable and legitimate to resolve these issues. However, nowadays, this theoretical framework is exceeded as the non-state dimension of international relations is clear. In this case, the Malian failed state is emblematic of territories where a myriad of uncontrollable networks of all kinds, economic, criminal and religious, remain entangled in the trading of licit and illicit goods, smuggling, and illegal migration.

We witness the relative failure of state intervention. Indeed, UNESCO alerts as to the degradation of certain monuments multiply while mobilizations against the imminent destruction of sites remain without avail. Besides the case of Mali, remember the Bamiyan Buddhas destroyed by the Taliban in Afghanistan in March 2001. In the future, these problems can only worsen due to inadequate governing and the exacerbation of identities caused by globalization. Finally, there is a vibrant lack of instruments of a cosmopolitan governance to achieve a consensual classification of this common heritage, its global ownership and its promotion. Its definition and its preservation, which cannot be left to market mechanisms nor to intergovernmental organizations, are a challenge today as the symbolic effect and the impact on knowledge of this recognition face anti-universalist conceptions relayed by archaic institutions.