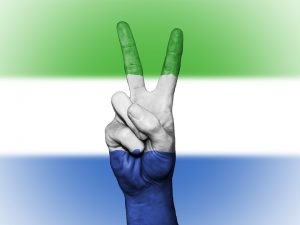 Former Liberian President Charles Taylor was sentenced on May 30th, 2012, to 50 years imprisonment by the Special Court for Sierra Leone. He was found an accomplice to war crimes and crimes against humanity that were committed during the civil war that ravaged Sierra Leone for 11 years. Since the Second World War during which the Nuremberg Tribunal had imposed 10 years in prison on Grand Admiral Karl Dönitz – ephemeral “designated successor” of Hitler – this is the first time that a Head of state is condemned by an international court for crimes committed during his term in office. This judgment, which was appealed, is another step forward in the fight against impunity for international criminals. It demonstrates the concern of international justice to punish in an exemplary way the rulers who fuel civil war in another state and are accomplices to abuses using the conflict to serve their own interests.

Leader of the NPFL (National Patriotic Front of Liberia), (1989-1997), who sought to overthrow the Liberian government of Samuel Kanyon Doe, he had undertaken, in 1991, to weaken its opponents abroad by supporting military operations of the RUF (Revolutionary United Front) of Foday Sankoh against the Sierra Leonean government. Elected president of Liberia in 1997, he continued to intervene in armed conflicts in neighboring countries (Guinea, The Ivory Coast) and to participate in atrocities in Sierra Leone, notably in the RUF attacks designed to take the cities of Kono (1998) and Freetown (1999). Under pressure from the opposition caused by his violent policy of repression, he had to resign in 2003 and was indicted by the Special Court for Sierra Leone (on 7th March 2003) on account of his support to the Sierra Leonean rebels and of crimes perpetrated during the civil war: war crimes (acts of terrorism, damages to personal dignity, cruel treatment, enlisting children to participate in the war and in looting) and crimes against humanity (murder, rape, sexual slavery and other inhumane acts). Nigeria, which granted him political asylum, then left him to be captured and handed him to the Special Court in 2006, at the request of the newly-formed Liberian government. He was thereafter tried in The Hague, not in Sierra Leone, so that his trial would not destabilize the region.

1. Transnationalisation of economic-political crime. In ‘failed’ or ‘collapsed’ States whose governments are opposed by military factions more or less established in the population, internal anarchy enables transnational criminal organizations to thrive. These develop their traffics by supplying warring factions with weapons. Their remuneration consisting in the violent seizure of the resources in the controlled territories, they do not hesitate, to do so, to commit the most serious international crimes. Peace is particularly difficult to restore when the leaders of a neighboring state are stakeholders of this trafficking. Indeed, in harmony with rebel groups from abroad, they are part of a cross-border criminal enterprise at the service of which they provide the means of their country; their positions thus compromising all the more the peace efforts deployed by the Security Council.
2. The abuse of governmental powers as an aggravating circumstance. While “the official position of the accused, whether as Head of State or as high-ranking officials,” is no longer considered “as absolving excuse, nor as a motive for reducing the sentence” by international criminal law (Statute of the Nuremberg Military Tribunal, art. 7), a trend is emerging today in the jurisprudence of international criminal tribunals. The latter now consider the abuse of the exercise of their powers by rulers as an aggravating factor in determining their sentence. This repressive strategy is relevant to fight this form of transnational crime in which rulers are most often accomplice of crimes committed than their direct perpetrators.

Triggered by the alliance between the Liberian and Sierra Leonean factions and of the NPF and RUF to take over power in their respective countries, the civil war in Sierra Leone has, as a main stake, the control of diamond fields and of the diamond market on which the Government of Sierra Leone was never able to establish its monopoly. This conflict then persisted due to the trafficking of these gems – the “blood diamonds” – for which Liberia had become the hub under the chairmanship of Taylor. Since it occupied the diamond region bordering Liberia, the RUF could easily obtain weapons from C. Taylor who, sheltered by his State position, could trade stones thus smuggled in. To put an end to a war thus maintained by such a criminal economy, the Security Council has used diverse instruments.

To dry out these traffics and deprive the rebellion of its resources, it first isolated the RUF by acting upon the neighboring States (Resolution 1171/1998), especially on Liberia. Then he ordered the country to stop giving any military or financial aid and took steps to freeze its assets. To circumscribe smuggling and increase the risk for “bleachers”, only imports of rough diamonds with a certificate of origin issued by the Government of Sierra Leone have been authorized (Resolution 1306/2000). To increase the effectiveness of this device, the Council eventually decided an embargo on diamonds from Liberia and arms deliveries to this country (Resolution 1343/2001). Moreover, since the process of transition and reconciliation launched under the aegis of the UN and ECOWAS (Economic Community of West Africa) in 1999 did not prevent the resumption of hostilities (500 peacekeepers were captured by the RUF in May 2000), the Security Council had to set up a peacekeeping operation (Resolution 1270/1999 creating UNAMSIL) on an exceptional scale: up to 17,500 troops.

The Special Court for Sierra Leone, created by an agreement between the UN and Sierra Leone (16 January 2002) to try “those who bear the heaviest responsibilities,” sentenced Taylor to an exemplary sentence that could contribute in the future to deter other governments to develop this particularly pernicious form of economic-political crime. Indeed, the Trial Chamber did not merely find him guilty of aiding, encouraging and planning war crimes and crimes against humanity in Sierra Leone. The Chamber also considered that he had abused his position as president of Liberia, as that he held in Committee of Five of the ECOWAS mandated by the UN to help restore peace, in the committing of these crimes. Finally, the Chamber felt that he had personally benefited financially by fueling the conflict: all these elements being retained as aggravating circumstances.
This decision is in the exact extension of the jurisprudence of the ICTR (International Criminal Tribunal for Rwanda). In this case, that court ruled in 1998 that the high ministerial functions held by Jean Kambanda, former Prime Minister of Rwanda accused of genocide, were “likely to definitively exclude all possibility of mitigation of punishment” (ICTR, 4 September 1998, Jean Kambanda).