PAC 151 – The Inertia of the Climate Arena The 22nd Conference of Parties to the United Nations Framework Convention on Climate Change, November 7-19, 2016 in Marrakesh 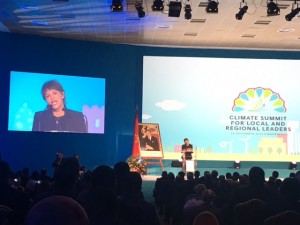 The 22nd CoP (Conference of the Parties) to the UNFCCC (United Nations Framework Convention on Climate Change) was held in Marrakesh from November 7 to 19, 2016. More than 22000 participants gathered – 40% less than for the Paris Conference – with nearly 16000 governmental representatives, more than 5000 representatives of UN organisations, IGOs (Intergovernmental organisations) and NGOs (-50%), and 1200 media representatives (-66%). This technical conference was tasked with putting forward an implementation strategy for the 21st CoP diplomatic turning point, later formalised in the Paris Agreement. The agreement came into force on November 4, 2016, thirty days after its ratification by 55 countries, representing 55% of global greenhouse gas emissions. The 22nd CoP was also the first session of the CMA (Conference of the Parties serving as the Meeting of the Parties to the Paris Agreement).
This international conference has also been impacted by the election of Republican candidate Donald Trump, a well-known climate sceptic, to the presidency of the United States on November 8, 2016. The President-elected clearly stated his intention to opt out from the Paris Agreement. This political event engendered even more uncertainty with regard to the achievement, within reasonable timeframes of the practical objectives (attenuation, financing, technology transfers) pivotal to climate resilience.

Historical background
Since the beginning, climate negotiations have been paced by key diplomatic events with mixed results (Kyoto, Copenhagen, Paris), and operational conferences aiming to finalise and detail the implementation of major agreements. The 22nd CoP is consistent with a multilateral session held fifteen years earlier, when Morocco first welcomed climate negotiators. From October 29 to November 9, 2001, the representatives of the 7th CoP gathered in Marrakesh to outline an implementation plan for the Kyoto Protocol, signed in 1997, and establish a juridical interpretation of the Buenos Aires Action Plan adopted in 1998, in the context of the Marrakesh Agreements. The election of Georges W. Bush, firmly opposed to any binding approach that would exclude China and developing States, raised serious concerns, especially when he confirmed his choice, in 2001, to not submit the protocol to the Senate for ratification. Combined with other tensions, mainly related to the scale and deadlines of the emission reductions, framed for developed countries in the Annex1 of the Protocol, the American unilateralism delayed the inception date of the Kyoto Protocol until February 16, 2005.
Prior to the 22nd CoP, several international decisions have maintained the Paris Agreement momentum. The resolution voted on October 6, 2016 by the ICAO (International Civil Aviation Organisation) first established a global mechanism of compensation for civil aviation emissions. The following Kigali amendment, adopted on October 15, 2016 after seven years of negotiations in the framework of the Montreal Protocol approved progressive elimination of hydrofluorocarbons (HFC) known to create a greenhouse effect 14000 times more powerful than CO2.

Theoretical framework
1. A fragmented multilateralism. The climate arena is strategically divided between the several dimensions of the international negotiations (conferences, work groups, partnerships, plans, programs, funds). The multiplication of these platforms follows the growing complexity of global issues (science, technology, finance) and a diversification of the levels of action (local to global). But these platforms also frame potential tensions by identifying the most relevant common thread of deeply heterogenous and competitive players. But as the Copenhagen coercive approach comes to an end, this atomisation might also reduce the operational scope of the climate deal.
2. A new schedule for climate action. Based on incentives, good will and consent, the Paris Agreement has set up long-term objectives and renounced any binding time-frame, even though the emergency is widely acknowledged. Several intermediate deadlines have been added (2018, 2020, 2050) with no associated targets or sanctions and varying with the topic (attenuation, adaptation funding). This critically undermines the probability to limit global warming by 2°C before 2100. Until now, nationally determined contributions rather lead to an increase of 3°C.

Analysis
Initiated by the Moroccan presidency and amended by different groups of countries, the Marrakesh Conference has adopted the Action Proclamation for our Climate and Sustainable Development. This declaration of intent merely recalls the principles of the Paris Agreement, and refers to « the urgent duty to respond to climate emergency », together with the inclusive nature of the Agreement in respect of the common but differentiated responsibilities of the States. This declaration, acting as a self-fulfilling prophecy, calls for an « urgent, irreversible, and unstoppable change » as new UNFCCC Executive Secretary Patricia Espinosa said. It also factors in all the obstacles on the way to climate resilience: « We call for a wider solidarity with the most vulnerable States, […] we call all non-State actors to join us and mobilise for immediate and ambitious action ». Even if the date has been brought forward by one year, governments have agreed on the 2018 deadline – one year too late for LDCs (Less Developed Countries) – for the operational completion of the Paris Agreement. 2018 will be the year of the 24th CoP and third phase of the first session of the CMA.
The ambiguities of the Paris Agreement have altered the pace and quality of the negotiations, especially without global vision or control over the States commitments. The difficulties associated with implementing debate sessions for this agreement have also delayed the progression of the work: while many representatives disagreed over approaches and calendars, the APA (Ad Hoc Working Group on Paris Agreement) did not reconvene on the second week of the conference. President Trump’s election also emerged in the political leaders’ debates and reunions. The US President may have all the legal rights to opt out of the Paris Agreement before the end of his mandate. But the treaty’s quick entry into of force and international outreach, the strong commitment of China – world’s first emitter of greenhouse gas emissions – and calls from American non-State actors such as Nike and Starbucks or local authorities have made a complete US withdrawal unlikely. As the text’s formal aspect is extremely versatile, the main risk remains US inaction or delaying tactics.
Several simultaneous initiatives have been launched to balance this potential inertia and revive the climate arena. The Marrakesh roadmap for the Climate Summit for Local and Regional Leaders, held on November 14, calls for « reinforced and simplified direct access modalities to dedicated climate funds », and announced the launch of the 2017 global campaign for localising climate finance. This is one of the solution put forward as « financial resources do not match the ambition of the international community ». Many representatives have noted that French and Moroccan climate champions Laurence Tubiana and Hakima El Haité, on the Summit’s closing ceremony, while asking them to devise territorial scenarios for 2050, never referred to any available mid or long terms resources. On November 15, 42 countries signed the NDC Partnership (Nationally Determined Contribution), co-funded by Morocco and Germany. It ambitions to be a collaboration platform for developing and developed countries, with international institutions to stimulate and hasten the implementation of NDCs in various sectors and at all decision levels in developing countries. It offers an online database – created with the UNFCCC, the Moroccan government and the German International Agency for Cooperation – that lists more than 300 bilateral and multilateral funds.
The launch of the Marrakesh Partnership for Global Climate Action by the climate champions, in the presence of 22nd CoP President Salaheddine Mezouar and United Nations Secretary General Mr. Ban Ki-Moon, aims to foster non-State action for the 2017-2020 period. Following the Lima-Paris action plan transformed in Global Climate Action Agenda, this partnership is first meant to boost and promote concrete commitments beyond uncertain State promises. Keeping global warming well below 2 degrees implies to step up efforts before 2020. The financial issue remains prominent: infrastructure investments required to undertake a low carbon economy amount to 4000 billion dollars for the next 15 years. The 100 billion dollar funding per year, that must be mobilised before 2020 by developed States and that have been debated over since Copenhagen are only but a drop in the ocean of climate emergency. The determination to act is so low that the identity of the applicant country for the 23rd CoP has only been unveiled during the Marrakesh conference. It has been decided that the 23rd climate conference would be chaired by the Fidji Islands and be held in Bonn, the UNFCCC’s head office.
Despite many scientific warnings, alarms bells set off by most vulnerable populations and various transnational mobilisations, the current commitments of the States will not grant climate justice. The partial reconfiguration of the climate arena, now involving non-State parties, might alleviate inaction, but only if substantial human and financial resources are deployed.