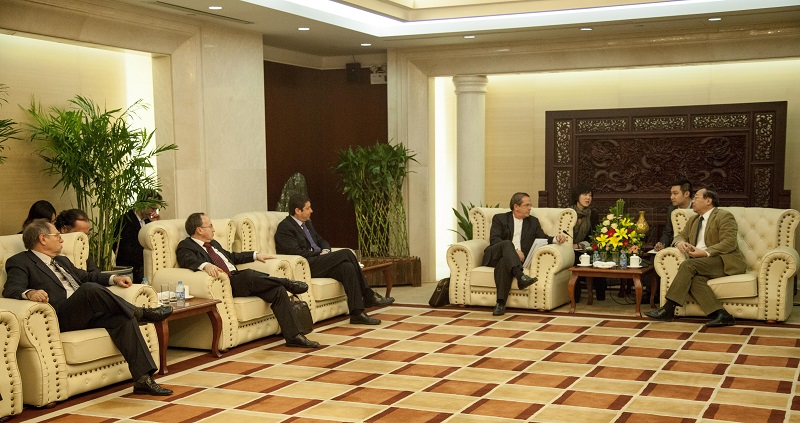 After a four-year construction period, Ethiopia inaugurated a railway line connecting its capital city Addis-Abeba with Djibouti. Built by Chinese companies, this new access to the Red Sea should boost the Ethiopian economy. This 3.4 billion dollar project (3 billion euros) has been financed up to 70% by the Chinese investment bank Exim.
> Historical background
> Theoritical framework
> Analysis
> References

Historical background
The growing development of China’s foreign operations is a clear sign of transformation of its global status. Responding to President Hu Jintao’s « going out » appeal (zouchuqu), China explored new markets and supply resources worldwide. Simultaneously, the country has been looking for new allies. This offensive has spread over areas traditionally marked by a Western presence. In this line, Beijing has continuously developed its influence over the African continent and has organised China-Africa summits based on multilateralism. This strategy has contributed to enhance and comfort its international stature.

The exchanges between the DRC (Democratic Republic of China) and Africa reached 200 billion dollars in 2015, against 12,39 billion dollars in 2002. In May 2014, Chinese Prime Minister Li Kegiang declared his intentions of doubling these results by 2020. Today, the DRC has clearly established itself as the first commercial partner for many African countries. More than 2500 Chinese companies, covering a wide variety of sectors from hydrocarbons to construction industry are now working with Africa. Indeed, the construction sector is a unique opportunity for companies to showcase their knowledge and professionalism. Moreover, this type of investment matches the official line highlighting the need to support a continent first and foremost considered as a fully-fledged partner and not only as a market.

China’s financial presence relies essentially on service delivery and FDI (Foreign Direct Investments), two major strengths which enabled the country to become one of the most prominent foreign investors. However, this assessment has to be proportionate to China’s global investments, as in Africa they only amount to 0,2% of its total FDI. The construction sector embodies this reality, as Chinese companies do not become either infrastructure owners or shareholders. Yet, the definition of FDI as established by international organisations imply that « investors » are companies that possess at least « 10% or more in actions or votes within a company ». As a consequence, China’s presence in Africa is now assuming more indirect forms, which are very typical of the ongoing globalisation process.

Theoritical background
1. A pragmatic enterprise. For Johnson Chalmers, this type of orientation illustrates how a powerful State leads industrial policies and steers production while encouraging strong managerial autonomy. In other terms, this configuration puts more emphasis on increasing market shares than short-term profits.

2. The rise of a developmental State. The Chinese State asserts his position as a central player of the international cooperation. It exercises its prerogatives as public power either directly, or through chosen intermediaries. However, some players remain beyond its control and may contest its authority.

Analysis
For a long time, the Democratic Republic of China has not used the word « aid », and would rather refer to a « win-win partnership » or « mutual assistance » between countries from the Global South. It was not until the publication of the White Paper on Foreign Aid in April 2011, that the government actually adopted this terminology. This paper imposes a buy-back process together with a set of general contracts to countries recipient of the aid. As a consequence, these provisions require compulsory use of firms and workers rather than payments in raw materials. This « Angolan model » applies to Central African countries rather than to South African and Northern African countries, which enjoy more negotiation power. But eventually, this type of public development aid has become a tool of Chinese diplomacy and an integral part of its soft power.

Chinese authorities have developed two types of mechanisms: they first allocate donations and interest-free loans with associated technical assistance. They also write off debts, which represents up to 70% of the aid. Secondly, they offer loans at preferential interest rates targeted at industrial projects and infrastructures. These loans are imperatively reimbursed on a floating rate and over modifiable duration, and average around 2% over 10 to 15 years. This new requirement has been added in 1995 with the creation of the China Ex-Im Bank. Placed under the control of MOFCOM (Ministry of Commerce) and the Foreign Office, this bank benefits from 3500 billion euros of Chinese currency reserve (a third of the planet’s liquidities) and embodies the financial arm of China’s foreign policy. It should be underlined that this institution is strengthened by four distinct organisations currently leading the aid policy: the MOFCOM, the Foreign Office, the CAD Fund (China-Africa Development Fund) and the SINOSURE (China Export and Credit Insurance Corporation). Moreover, these entities receive support from local governments, that play a pivotal role within the management of this process.

But this strategy is not overseen by any central organisation able to coordinate these actors. Yet, recurrent discrepancies have appeared between public and private interests. Indeed, these organisations form the pillars of a developmental State compelled to take all necessary measures to achieve its goal. In this regard, collaboration with major private actors is mandatory, to such extent that they influence the whole State’s policy.

China’s presence on the global scene has spurred competition between big national and international groups. To developing countries, the DRC stands now as a balance to the political and ideological influence of Western States. But the very attractiveness of the Chinese model should be examined, as China’s control policy contributes to increasing the debt of several nations such as Ethiopia, the Democratic Republic of Congo, Angola and Ghana. Moreover, the massive use of Chinese workforce together with uncontrolled immigration has fuelled criticism in these regions already burdened with high unemployment rates. Furthermore, Chinese products’ quality and infrastructures are widely questioned. Finally, Chinese companies are repeatedly involved in many corruption scandals. Mainly active within the construction sector, these companies have altered the image of Chinese power and distorted the message destined to developing countries. China is thus compelled to fine-tune its strategy to the complex constraints of a fragmented and instable Africa
.