PAC 141 – A Political Ambition without Legal Constraints The COP21 Outcomes 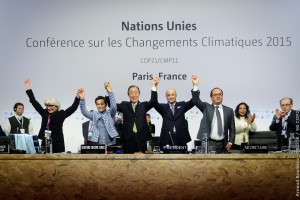 The Paris Climate Conference (COP21) opened in Le Bourget on November 30, 2015. The conference reunited 147 State Leaders, negotiators representing 195 countries and 50 000 participants. On December 12, a global agreement replacing the Kyoto Protocol has been adopted. The member States envisioned a limitation of the rise of global temperatures well below 2°C and sought to keep up the actions undertook to stop the temperature rise at 1,5°C in relation to pre-industrial levels.
> Historical background
> Theoretical framework
> Analysis
> References

Global warming is today one of the main threats to the survival of the human kind. In order to cope with this issue, the United Nations Framework Convention on Climate Change (UNFCCC) was signed in 1992 by 153 countries. With respect of equity, this document had been drafted to identify, both for industrialised and developing States, a principle of common and differentiated responsibility. Five years later, the UNFCCC signatory countries adopted the Kyoto Protocol, first legally binding global instrument meant to compel developing countries to reduce their GHG emissions (GreenHouse Gas). Or, the United States pointed out an infringement to the development of the American economy and hence opposed the ratification of the treaty. The protocol was nonetheless enforced when ratified by Russia in 2005. As the protocol was to expire by the end of 2012, the post-Kyoto period had been considered from then. According to the roadmap signed in 2007 in Bali, the States had to finalise a new document in Copenhagen in 2009 (COP 15). But if that summit successfully gathered a large number of leaders, NGOs and civil societies, no significant progress had been made then. In Copenhagen, the final draft had been negotiated in a closed session by a small group composed of the USA, and the BASIC group of emerging countries (Brazil, South Africa, India and China). However, the text did not pass. At COP 18, which took place in Doha in 2012, the Kyoto Protocol has been extended until 2020, while postponing the adoption of a new treaty to year 2015. Two weeks before the opening of COP21, Paris was hit by unprecedented attacks, on November 13 2015, which resulted in 130 killed and 352 injured. Security measures worldwide have been strengthened because of the terrorist threat, and the holding of COP21 even questioned. Yet, the summit took place without any incident.

Theoretical framework
1. A model of joint regulation. At the heart of the climate talks, we may identify hierarchies of authority. In this respect, the United Nations represents an asymmetric interdependent system between unequal parties. The rules are constantly re-shaped, resulting from action or non-action. According to Marie-Claude Smouts, two types of regulation, two rationales constantly confront each other in this type of organisation. The first one comes from dominant players holding the power to shape new rules and have them adopted in order to master the collective game. The second one comes from subordinates. The latter strive to set up bypassing and dodging strategies to nonetheless influence the final decision.
2. North-South de-territorialization and re-territorialization. In the post Cold War period, the territoriality principle has gone through major transformations. The territory of the State has been questioned by material and immaterial transnational flows, which result from lighter border controls and decline of spatial and logistical constraints. This has been followed with the de-territorialisation of international exchanges that led to a reorganisation of the governance in various sectors (security, ecology, migrations, health, etc.). But recent multilateral negotiations on climate change introduced a confrontation of this rationale with the traditional North-South divide, which hampered the adoption of a global agreement. In fact, the climate threat imposes a global management of the atmosphere as a common good, which breaks out the classic notion of territorial appropriation.

Analysis
The UN Climate Conference represents a major opportunity for the member States. In 2015, 195 countries ratified the UNFCCC. In the multilateral negotiations, diversity and heterogeneity of the parties add up to the United States hegemony. In the light of this, the US opposed the ratification of the Kyoto Protocol considering it an infringement to the development of its own economy. Consequently, the non-action of a dominant country considerably diminished the efficiency of the public authority on international cooperation. Moreover, many countries have decided to get not involved in the second phase of the Protocol (2013-2020). Moreover, after 2000, the emerging BASIC changed the situation. China became one of the most prominent CO2 emitters in the world, exceeding the emissions of the United States in 2006. In Copenhagen, the two leaders and emerging countries jeopardised the mutual trust built within the United Nations, which eroded even more the negotiations. As a consequence of this tense climate, the Copenhagen agreement has not been adopted by the UNFCCC, even though not legally binding for the parties.
On the other hand, the subordinate countries attempted to expose their point of views during the talks through an “iterative game“, which contributed in pacifying conflicts between members. In this framework, the parties sought any opportunity to meet their expectations on specific topics, but had to compromise on some others, resulting in a feeling of eternal restarting. This process compelled the COP21 to come up with reciprocal commitments. It is worth remembering that the action taken to limit the temperature rise to 1,5°C and the expression “loss and damage” firstly mentioned by the alliance of small Island States have been included in the Paris Agreement. However, these principles were strongly rejected by the United States.
It should be underlined that this document is the first universal agreement in which all of the developed countries, together with developing countries, have recognised their obligations to manage their GHG emissions. From this point of view, the traditional North-South governing mode has been altered according to the threats related to climate change. This de-territorialisation and re-territorialisation movement erodes the localisation constraints. For example, an IPCC report (Intergovernmental Panel on Climate Change) indicates that climate change is today the first cause of regional conflicts and forced human migrations. Moreover, the de-territorialisation process is also linked to the joint policies that countries have committed to, in order to achieve economic stability and levelling of social challenges. The long-term objective is really ambitious (below 2°C) and entails a collective effort. It raises an issue of financing. In this regard, the Paris Agreement sets an obligation to developed countries to support poor countries and help them tackle climate change. From 2020, 100 Billion dollars will then be delivered on a yearly basis. Developing countries are also invited to fund them on a voluntary basis. This global agreement will be enforced when 55 countries counting for at least 55% of the global emissions will have completed their ratifying procedure. However, the text also introduced the INDC (Intended Nationally Determined Contributions) for the reduction of the countries’ GHG emissions. This tool enables countries to determine their own contributions on a voluntary basis, according to their respective capacity, economic context and national priorities. In other words, this very ambitious treaty is barely binding from a legal point of view. In the future, an achievement-oriented agreement should mainly rely on the respective expectations of the parties influential enough to make a mark on the outcome of the negotiations.