Chaos International > About us > Organization > Translation Hub > English > PAC 137 – The Nobel Prize, a Commitment against Islamism 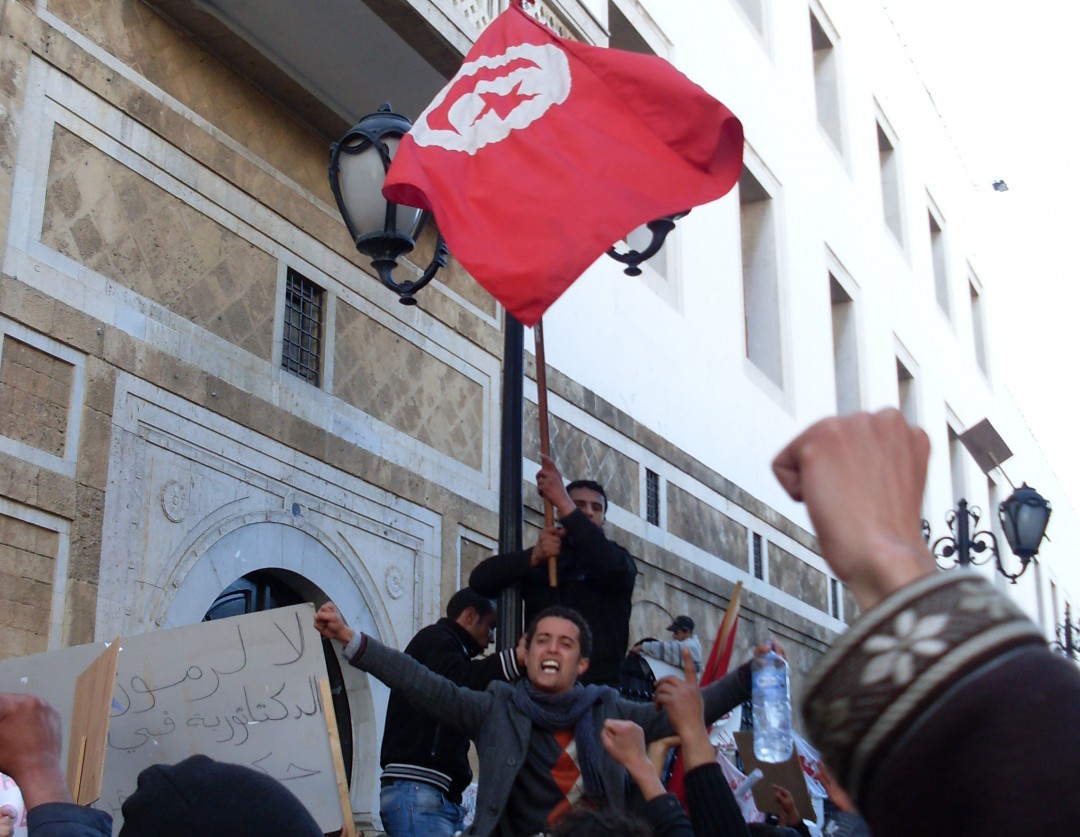 The Nobel Committee, reunited in Oslo, awarded this year (on October 9, 2015) the Nobel Peace Prize to the quartet who has been leading the « national dialogue » in Tunisia for more than two years. The committee pays here a tribute to « its decisive contribution in the building of a pluralistic democracy in Tunisia in the wake of the ‘Jasmine Revolution’ of 2011 » This group is formed of four civil organisations: 1) The Tunisian General Labour Union, UGTT. 2) The Employers’ Association, the Confederation of Industry, Trade and Handicrafts (Utica). 3) The Tunisian Human Rights League. 4) The Tunisian Order of Lawyers. The jury indeed considered that they collectively took essential steps to de-escalate the conflict between islamists and non-islamists at a time when the country was on the brink of civil war.

Historical background
During winter 2010, young unemployed graduate Mohamed Bouazizi, like many other young Tunisians, sells fruits and vegetables on Sidi Bouzid market to survive. Lacking administrative license, Mohamed Bouazizi is arrested and his products confiscated. Not able to defend his case, he chooses to set himself on fire on December 17, 2010. From then, in every town and village, a major part of the Tunisian population expresses its solidarity with the young man. At the same time, protests rise against the regime, held responsible for mass unemployment and corruption undermining the economy. In the following days, the whole country flares up as the government fights the protests through ruthless police crackdowns. Eventually, after a month of riots and a major strike, the regime collapses. In spite of reshuffling the government and some vague statements towards appeasement, President Ben Ali has to escape to Saudi Arabia on January 14th, 2011, putting an end to 23 years of unchallenged reign. This historic phase is soon called the “Jasmine Revolution“.
Mohamed Ghannouchi forms then a transitional government of national unity. Simultaneously, all political prisoners are set free, Human Rights League reinstated and the principle of total freedom of information proclaimed. Finally, the Department of Communication, accused during Ben Ali’s regime to censor the press and impede freedom of speech, is suppressed. Facing the pressure, Ghannouchi has to resign as well on February 27th, 2011. He is replaced by Bourguiba’s former minister, Beji Caïd Essebsi. The state of emergency, in place since January 2011, is extended. After the legislative elections of October 26, 2014, where anti-islamic party Nidaa Tounes (Call of Tunisia) comes in first, the Assembly of People’s Representatives replaces the constituent assembly. In the second round of the presidential election organised on December 21, 2014, Caid Essebsi wins the election with 55,68% of the votes cast, against 44,32% for Marzouki. Caid Essebsi becomes then the first president accessing power through a democratic and transparent election. After several months of political instability, troubles and a period of institutional trial, Tunisia seemed to have gained some of a stability. However, the country was soon severely hit by several islamist operations. Firstly, the attack led by the Islamic State against the Bardo museum on March 18, 2015, results in 24 killed (21 tourists, one policeman and two terrorists), and 45 injured. Then, on June 26th, 2015, Daesh targets the Port El-Kantaoui seaside resort in the so-called Sousse attacks, killing 39 persons and wounding 39 others. Lastly, the terrorist organisation also claimed responsibility for the suicide-bombing that took place in Tunis on November 24, 2015 and hit the presidential guard.

Theoretical framework
1. A Nobel for a secularisation process. Built throughout decades, the Nobel diplomacy is now clearly stated and identifiable. Founded on humanist values stated from 1895 onwards by Alfred Nobel in his will, the organisation is now able to take marked positions in international matters. For instance, in awarding the Nobel Peace Prize to activists in favour of a democratic and secular Tunisia, the Norwegian Committee expressed its support against islamists they are victims of. In fact, the committee intends to bring all its weight in the political struggle actually taking place in the country. Even better, further than Tunisia, the Committee actively takes the side of all of those who fight Daesh throughout the world.
2. A Nobel for an entire civil society. The very strict conditions regarding Nobel awards, detailed by Alfred Nobel himself and enforced in 1901 do not allow the Committees – whether it be Physics, Chemistry, Physiology-Medicine, Literature or Economy – to award the Nobel to more than three laureate for one prize. It must be noted, indeed, that the Oslo Jury sidestepped and even transgressed the ban when nominating the quartet as sole and unique recipient of the prize. However, one must understand that through the quartet, the Nobel institution distinguishes rewards and politically supports the entire Tunisian civil society.

Analysis
We count today several hundreds of thousands of deaths in the war that has been raging for 4 years now in Syria. A war that begun, in fact, in 2011, in the wake of the Arab Spring triggered by the Tunisian Jasmine Revolution. Daesh islamists (Islamic State) leading the fights against both troops of shiite President Assad and Kurds, took over several cities and especially large territories in eastern Syria. So much so, the conflict has been internationalised insofar as Russia and Iran offer military backup to the regime, while an international coalition, led by the United States, endeavour to contain the Islamists’ progression. However, the military achievements run farther than this geographical area. Indeed, Iraq, Kenya, Libya, Mali, Nigeria, Somali and Afghanistan – to name only a few weak links – appear to be deeply unstable and destabilised by Islamist movements, whether it be Daesh, the Islamic front, Al-Qaida, Bokoh Haram, AQIM (Al Qaida in Islamic Maghreb) or AIG (Armed Islamic Group).
In such international context, awarding the Nobel to the quartet this year has particular significance. That four Tunisian associations promoting human rights and secularisation received the Nobel must be understood as a clear political engagement towards their mission and objective. With this award, the Nobel institution enshrines their political orientations bestowing on them the worldwide prominence and reputation of the prize, and states once again its diplomatic line built year after year. Yet, the institution has been steadily opposing the Nobel’s philosophy to the States. For this to happen, the institution is not reluctant to – through its global rewarding system – interfere in ongoing disputes, with the clear aim to influence, modify, reverse or oppose prevailing rationales. In many ways, it may be seen as a diplomatic intervention policy. For the record, the Norwegian Committee designated the OPCW as the 2013 laureate (Organisation for the Prohibition of Chemical Weapons) in charge since 1997 to monitor the compliance with the Prohibitions of Chemical Weapons Convention, signed in 1993. At that time, this organisation was specifically coping with the Syrian case, in the wake of the chemical attack that took place in Damascus, on August 21, 2013. In this case, the Nobel diplomacy intruded in the States High Politics, irrupting in the global arena to interfere with the political handling of the Syrian conflict. Furthermore, as it payed a tribute to collective security and multilateralism, and put these notions on the global agenda, the Nobel institution established itself as an essential intermediary to state parties involved in the war.
The 2015 Nobel awards proceeds from the same diplomatic template. This template may be deciphered as such: 1) identify a conflict, 2) clearly take a side by awarding a Nobel prize to one of the parties, 3) act as a regulator by creating and securing international norms. But awarding a Nobel to the entire Tunisian society clearly follows a new pattern. This previously unseen choice marks indeed a significant milestone for the Nobel institution, stating its symbolic significance and repeated global impact on world’s state powers, in accordance with its very own positions.