Chaos International > China > PAC 121 – The Emergence of a Transnational Citizenship

PAC 121 – The Emergence of a Transnational Citizenship The Umbrella Revolution, September-December 2014 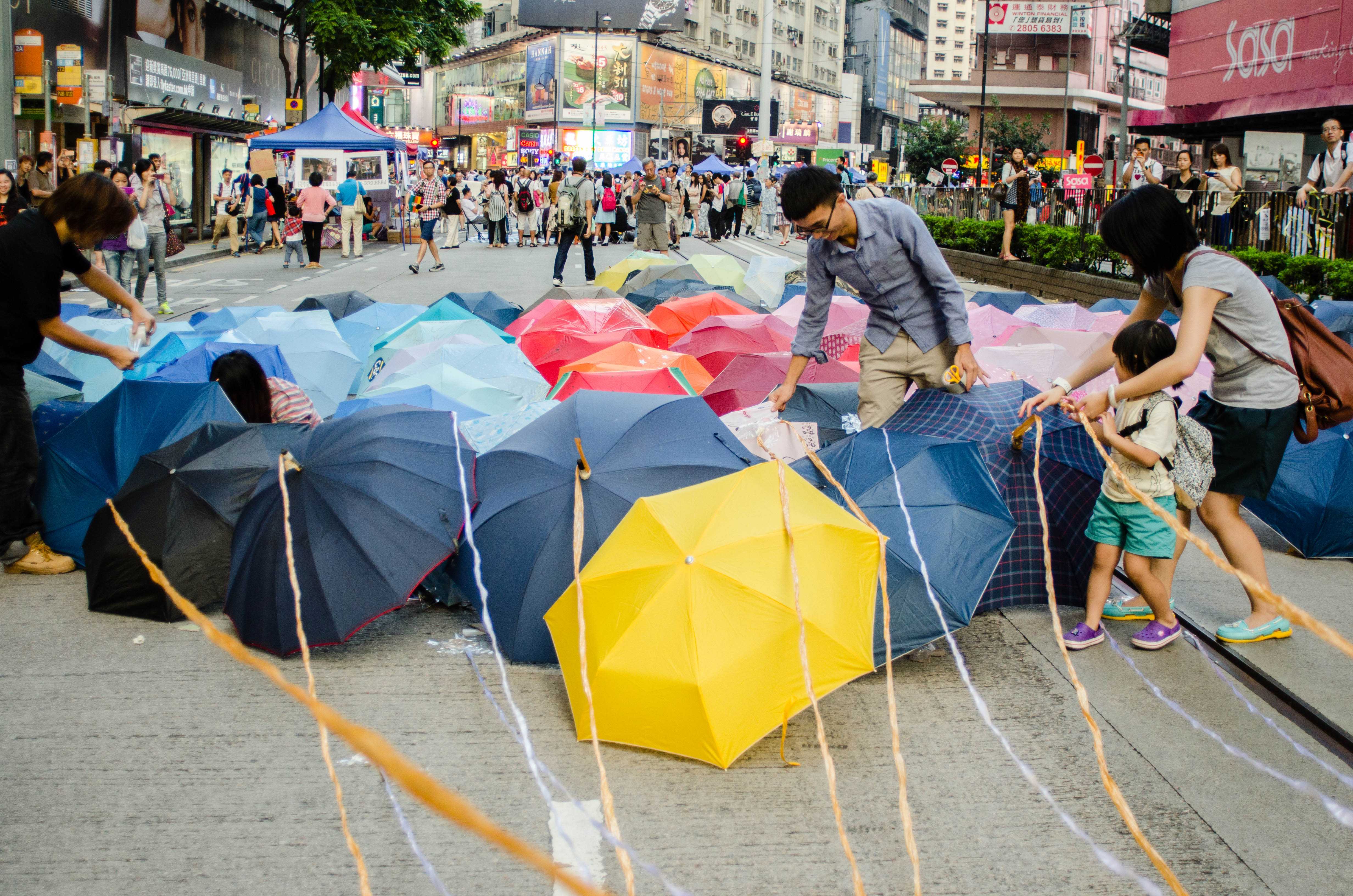 On August 31, 2014, China’s National People’s Congress (NPC) adopted a restrictive plan designed to impede the election of an executive leader of Hong Kong in 2017. At the end of September, this decision sparked a significant mobilization of civil disobedience, henceforth called the umbrella revolution. Mostly students, the protestors demanded the organization of an election with universal suffrage, free and pluralistic, in order to choose the primary leader of the Hong Kong administration. However, the territory’s authorities – and especially those in Beijing – demonstrated their firmness by not ceding to any demand. Ultimately, law enforcement evacuated the occupied sites in mid-December.

Democracy has only existed for a short time in Hong Kong. During the colonial era, between 1841 and 1997, Hong Kong’s governors were directly designated by the British monarchy. Chosen from the diplomatic corps, with the exception of the last governor, Chris Patten, former minister of the conservative party. In the 1980s, the principle of an election was gradually introduced in the cantons in the form of a District Council. In 1991, the first ever a direct vote was organized. Its aim was to elect eighteen of the sixty members of the legislative Council.

Signed by the Prime Ministers Margaret Thatcher and Zhao Ziyang, the Sino-British Joint Declaration of 1984 provided for the retrocession of Hong Kong to China in 1997. It otherwise guaranteed the territory’s political autonomy with the famous principle of one country, two systems. However, the Hong Kong Basic Law adopted in 1990 by the NPC now serves as the territory’s constitution. According to this document, “the permanent residents of Hong Kong have the right to vote and to present themselves for elections” (Article 25). Besides that, it was decided upon that “the head of state [would be] chosen by universal suffrage, after approval of the candidates by a broadly representative nominating committee, in accordance with democratic procedures” (Article 45)

Since 1997, three heads of state have come one after the other over four terms. An electoral committee designated each figure. Leung Chun-Ying, the current head of state, earned a score of 57.8% (689/1193) in 2012. In reality, this result remains very mediocre considering that the electoral committee was composed of pro-Beijing delegates who were obliged to limit themselves to ratifying the choice of an already nominated candidate.

At the end of December 2007, the ANP approved the organization of the election of a Chief Executive of Hong Kong by universal suffrage in 2017. Yet, on August 3, 2014, the ANP tightened the rules for the future election. From now on, two candidates, a maximum of three – would first have to obtain a majority within the election committee that would then become the nominating committee. According to this logic, the CCP will control the election process starting at its earliest stages. Nonetheless, this antidemocratic measure has provoked indignation. Starting at the end of September, the primary roadways in the center of Hong Kong were occupied by students, soon joined by a large part of the population.

1. Authority based on a centralized surveillance system. Equipped with a democratic façade, the political structure of China is ruled by the system of nomenklatura, a means of designation borrowed from Bolshevik institutions. This opaque system allows the CCP to force the election of preselected candidates. Otherwise, upper level senior management draws up the list of candidates. Thus the central power in Beijing puts into place a pyramidal system of control on all levels. Yet, wanting to extend its monopoly of political power to Hong Kong, the Chinese authorities enter into conflict with a transnationalized movement of citizen resistance.
2. Citizenship constructed by a transnational network of information. Vector of information and tool of mobilization, social networks have played a decisive role all throughout the demonstration. With Facebook, Twitter and other applications useful for instantaneous sharing, the latest technical innovations appearing in telecommunications contribute to the transformation of social space on a global scale. Indeed, the appearance of these networks of networks allows for the emergence of democratic debates beyond Chinese borders. Benefitting from transnational support, their dynamic lies in the instant willingness of individuals and evolves without a true leader or a developed organization. But, the drawback of this advantage lies in the fact that this spontaneous and hierarchical mobilization remains unstructured and unstable throughout time.

Today the world stage is experiencing a succession of popular revolts. Despite diverse socio-political configurations, these movements calling for democracy participate in the emergence of a transnational citizenship made possible by social networks. The demonstrations – in Hong Kong, in Taiwan or in numerous other countries in the Arab world – show, above all else, the tensions between centralized state power and the transnational dynamic of networks of individuals.

These last few years, innovations in telecommunications have transformed the public sphere on at least two major points. 1) By broadcasting and receiving a significant quantity of information and ideas, the capacity of individuals to promote their own views has grown. Brought together, individuals defining themselves as citizens, acquire considerable power to defend the public interest. 2) Social networks reinforce the global interdependence between individuals and communities. The perception of a threat – even if it emanates from the other side of the world -, of the values that we defend, elicits the will to act. Otherwise, the immediate approval by others perceived as being like us, via likes, shares or comments, produces a feeling that legitimizes this desire.

Thus, we are not surprised that following the violent acts perpetrated by law enforcement against Hong Kong students, an international mobilization was quickly organized. On October 1, support rallies were relayed by sixty cities worldwide, each mobilizing hundreds if not thousands of people. In addition, the preoccupations expressed by a large number of western political leaders and the Secretary General of the United Nations, Ban Ki-moon. To such an extent, that the head of Chinese diplomacy, Wang Yi, recalled the principle of non-intervention during his visit to Washington.

However, the mobilization weakened throughout time while the government of Beijing maintained its reform of the election of the Chief Executive of Hong Kong. In other words, the opaque and Leninist system of nomenklatura was established in Hong Kong. Note in this regard that this normalization coincides with the coming to power of the new Chinese leader. From the moment he assumed his role in 2012, Xi Jinping had to first establish his authority in order to then secure a second term. In this case, the number one Chinese leader must continue to establish himself opposite his Prime Minister Li Keqiang, who supports further reforms. As a result, at a time when Xi Jinping is striving to assert his authority, democratic demands must be mastered, or else annihilated.