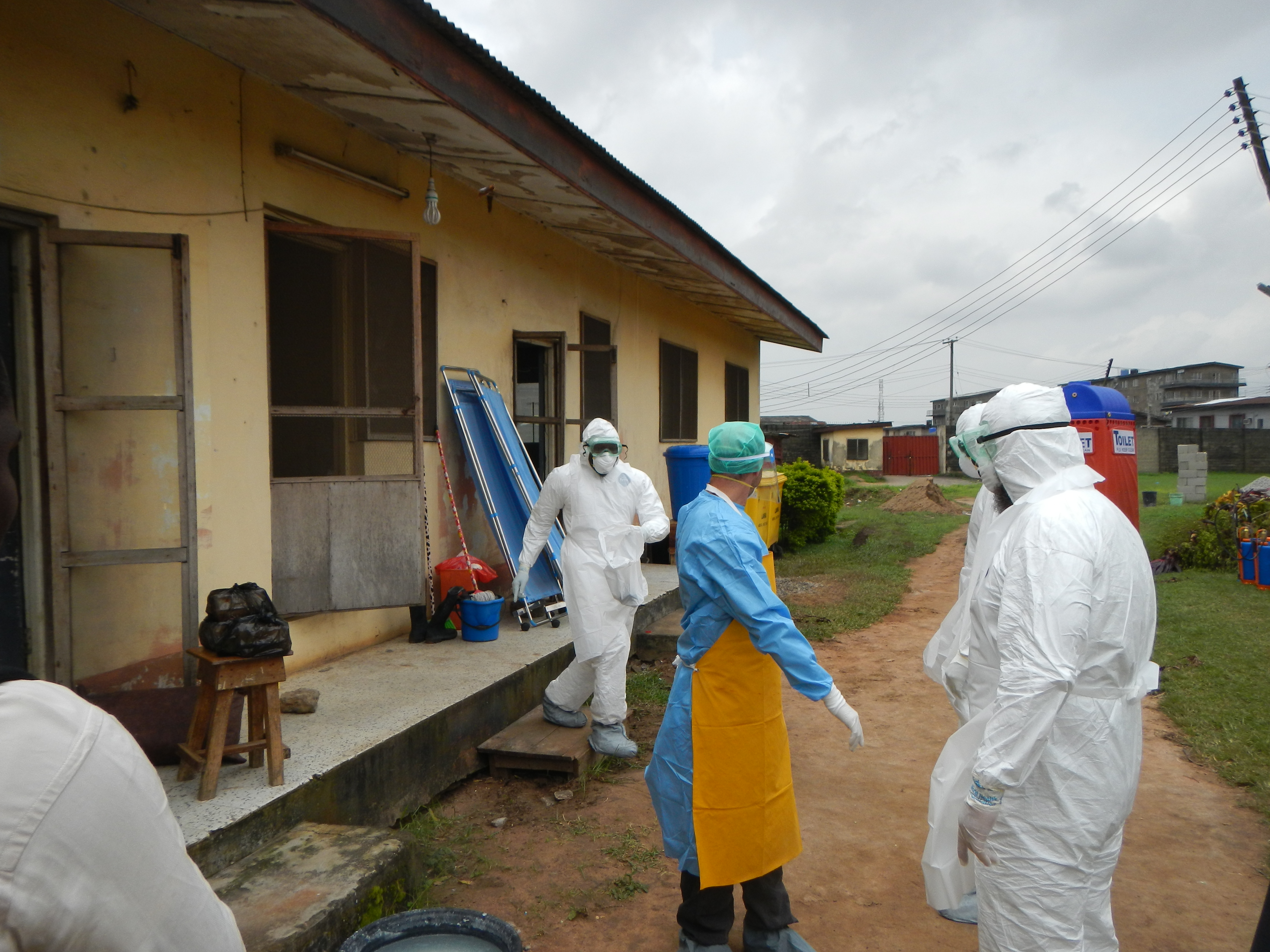 The first Ebola virus contamination outside the African continent was confirmed on October 6, 2014: a Spanish nurse’s aid supposedly contracted the illness in Madrid while treating a repatriated missionary. We shall note that this announcement comes a few days after the diagnosis of another case, in the United States, in this instance a Liberian who arrived in Dallas from Monrovia. Subsequently, the epidemic, especially ravaging in three countries – Guinea-Conakry, Liberia and Sierra Leone –, represents an immediate threat apt to be exported to the rest of the world; especially as malfunctions are identified during screenings and in care procedures in Spain as well as in Texas. So much so, that the international media is evoking a growing psychosis of populations faced with an infection characterized by dramatic bleeding symptoms and a high mortality rate. On November 2, 2014, the figures published by the WHO (World Health Organization) reported 4,951 deaths for 13,567 cases identified essentially in western Africa. It should be noted that the management of this health crisis is becoming a leading political issue, even in states that are not directly affected by the disease.

Identified in 1976 during two waves which appeared simultaneously in ex-Zaire – 280 deaths for 318 documented cases – and in Sudan, the Ebola virus belongs to the family of filoviruses and breaks down into five different types, including the Zaire strain at the origin of the 2014 epidemic. If the mechanisms of transmission of this zoonosis – the natural reservoir is allegedly made up of fruit bats – to humans are not completely understood, several massive contaminations took place during the last two decades. We shall mention twenty crises that occurred in Gabon, in DRC (Democratic Republic of Congo), in South Africa and Uganda which claimed hundreds of victims. The illness – whose incubation period can last from two days to three weeks – typically consists of an acute hemorrhagic fever disturbing the hemostasis and provoking serious immunosuppression, which ultimately leads to a terminal shock and multiorgan failure resulting in death. With no approved treatment or vaccine, care should minimize the risk of contagion by direct contact with bodily fluids and organic tissues of infected individuals.

According to epidemiological investigations, the health crisis currently afflicting West Africa allegedly began in December 2013: the patient zero supposedly being a two year old child who died in a village in southeast Guinea-Conakry located not far from the borders with Liberia and Sierra Leone. Although the disease was already spreading throughout Liberia, it was not recognized until March 2014. After a brief lull at the end of the month of April, contaminations began again with force and in May extended to Sierra Leone, Nigeria and Senegal. On August 8, 2014, the WHO declared a state of “global public health emergency” and called for large-scale international mobilization in the face of the growing number of victims and the powerlessness of local authorities.

1. The brutal exposure of the crisis. Despite several poorly publicized warnings on the degradation of the health situation in western Africa, the first reported exported triggered overexposure by the media, which led certain decision-makers to hurriedly improvise little adapted measures.
2. The risky instrumentalization of a moral panic. The sociologist Stanley Cohen identified this concept when a condition, an event, a person or a group is designated as a threat for the values and interests of a society. In the case at hand, this notion allows us to understand a host of disproportionate or even discriminatory reactions, in the face of the epidemic.

If we must underline the novelty of this outbreak in West Africa and moreover in an urban setting – while the preceding episodes were relegated to relatively isolated forest areas in central Africa –, we can attribute the late response to inertia on the part of the WHO as well as to an underestimation of the threat. The recurrent alerts issued by MSF (Doctors Without Borders) led us to believe in the foreseeable collapse of fragile health systems, in the case of Liberia and Sierra Leone, due to several years of civil war and extreme violence. Besides the deficit avowed by professionals – Liberia counted around fifty doctors for 4.3 million inhabitants in 2014 – aggravated by nosocomial infections, affected states have been confronted by the mistrust of their own populations. In Guinea, health workers have reported multiple accounts of people fleeing once they see approaching medical teams who themselves are accused of spreading the virus: eight people engaged in medical outreach in the southeastern part of the country were killed in mid-September 2014 in the context of their work. Otherwise, measures improvised in haste by the governments of Liberia and Sierra Leone – militarization of curfew and imposed quarantines of entire neighborhoods, obligatory cremation of all deceased persons, closing borders – have given rise to riots in shanty towns. Refusing to allow the presence of the illness, armed demonstrators attacked a treatment center in Monrovia in August, provoking the diaspora of patients and the flight of potentially contaminated materials. These attitudes of rejection fall in line with recent history of societies divided by intense conflicts that have discredited central authorities; moreover, these authorities struggle to communicate rationally about the risk and to justify the necessary control of movement.

As evidenced, these indispensable yet not easily accepted models are likely to feed the perverse effects of an epidemic whose economic impact could be counted in the hundreds of millions of dollars. If fiscal imbalances – brutal augmentation of public and health spending and declining tax revenues – and the fall in productivity are already being felt, the consequences could especially be indirect according to a study by the World Bank which underlines the social dynamics generated by the fear factor, or the anxiety of possible contagion. We shall cite the suspension of transportation and the closing of workplaces, the slowing of the mining industry – principal engine of growth – and of the agricultural sector – in a context where food insecurity remains chronic – leading to shortages and price inflation. These disturbances are worsened by suspensions of airline connections in the affected countries, decided by most companies – including Brussels Airlines, Arik Air or British Airways – despite requests by the United Nations, which complicate the routing of aid. In this logic, it is important to consider the effectiveness of border closings – reputed to be quite porous – decreed by the states in the region and likely to stimulate clandestine networks capable of escaping all control.

By its sudden and alarmist character, putting the health crisis on the agenda late in the game maintains an ensemble of practices and discourses founded on fear. Particularly as the Ebola virus has inspired disaster movies – as with the films Outbreak (1995) or 28 Days Later (2002) – and also literary works such as The Hot Zone, a best seller by Richard Preston published in 1994. The West African epidemic therefore finds a particular resonance in the imagination of numerous societies, which can go against a comprehensive process of action mechanisms and transmission of the illness. Beyond the expected emergence of conspiracy theories, the difficulty lies especially in the instrumentalization of a potential moral panic by political actors in order to justify discriminatory measures. The crisis has thus become an issue relative to the midterm elections in the United States; following the Dallas incident, a number of Republican candidates are demanding the closure of borders and systematic quarantine, an issue facing the Obama administration. Moreover, the successive decisions of the Australian and Canadian governments – which have not, however, recorded any cases on their territory – to suspend the deliverance of entry visas for all citizens of countries affected starting at the end of October, also participates in the isolationist temptation. This gesture has been denounced within the Commonwealth by the government of Sierra Leone to the extent that these stigmatizing models overshadow the fact that the fight against this global plague is first of all being played out in western Africa, whose confinement appears utopic and counterproductive. Faced with this viral threat, officials must now divest themselves from the idea that a physical containment of the scourge is still possible in light of the unprecedented intensification of international flows of goods and people.