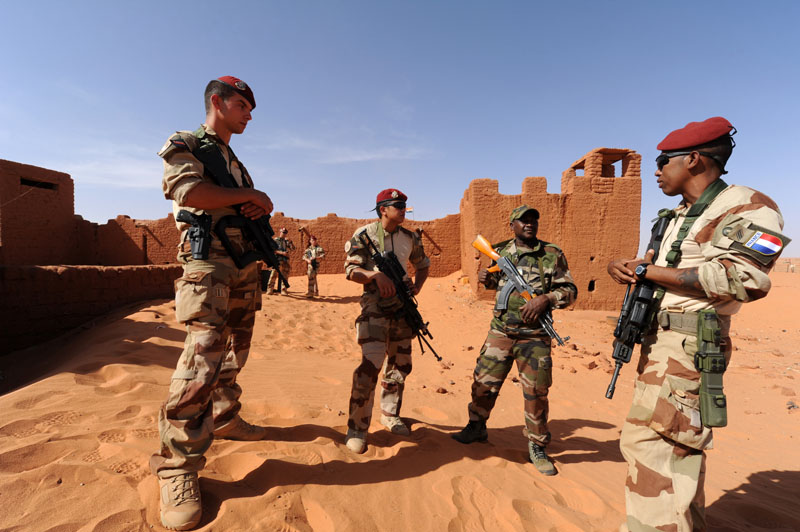 One year ago, on December 5, 2013, France launched operation Sangaris1 in the Central African Republic, its 7th since the African nation’s independence in 1960. The French army arrived in Bangui with the mission to remove the militiamen of the Seleka (Muslims) who had taken power and were multiplying the abuses against the anti-balakas (Christians). Another important matter was the preparation of the terrain for an international force that the United Nations had accepted to form on the same day the operation began (the African-led International Support Mission to the Central African Republic or MISCA, French acronym for (Mission internationale de soutien à la Centrafrique sous conduite africaine).

Today the specter of the Rwandan genocide has faded. However, 2.5 million Central Africans remain dependent on humanitarian aid. As for the displace persons, they are counted by the hundreds of thousands. At the same time, in Chad, neighboring country to the CAR, other French forces are also deployed within the framework of the Barkhane military presence. This plan furthers Operation Serval put into place in Mali to fight against Islamist terrorists, traffickers and secessionists; their alliance threatens the stability of the entire Sahelian region. All the while objecting to the practices inherited from Françafrique and the role of gendarme of the continent, Paris is justifying its double presence by different considerations: the first intervention allegedly falls within the framework of the R2P (Responsibility to Protect), while the second purportedly complies with cooperation agreements already in place.

1. The Responsibility to Protect. Appearing in 2001 following the projects by the ICISS (International Commission of Intervention and State Sovereignty), this concept is a continuation of the former notions of interference, duty and the right to intervene. The semantic progression reflected the maturing process of a project that appeared at the beginning of the 1980s at the meeting point of four phenomena. Firstly, academic research allowed for the convergence of Realist approaches (based on work by Kenneth Waltz then Richard Ullman) and of Scandinavian peace keeping (Johan Galtung) through the idea of “societal security“. United Nations reflections committees (O. Palme, G. Brundtland, W. Brandt…) reclassified it as “global security“, an expression that was then formalized by the Conference on the Relationship between Disarmament and Development in 1987. The third element, diplomacy of Human Rights, which had largely opposed humanitarian law, evolved when by entryism the French doctors steadily became the majority members of the Secretary of State for Human Rights and facilitated the adoption of the first resolutions of the General Assembly on interference (43/131 and 45/100). Finally, the diplomatic positioning of middle powers like Canada in favor of “freedom from fear” (Gareth Evans, Lloyd Axworthy) and Japan favorable to “freedom from need” (Sadako Ogata) substantially contributed to the transformation of the international agenda. The fall of the Berlin Wall, as an emblematic event, served to highlight these four global tendencies that liberal authors interpreted as the coming of a “post-Westphalian world“. By replacing “the billiard balls” – which for Arnold Wolfers symbolized the relations between States likened to Hobbesian gladiators – with John Burton’s cobweb or Norbert Elias’ net, the adherents of this new world thus intended to substitute the Durkheimian solidarity of a civil society, freed from any exclusive citizen allegiance, for the Weberian logic of States. However, considered too radical, interference was quickly replaced by the “right to intervene” (Resolution 770 in 1992), then by the “duty of humanitarian assistance“. The latter qualification seemed to want to abandon the principle by opposing a moral duty (humanitarian assistance) to states’ positive law before the ICISS formalized the conditions of cohabitation between the obligation to assist populations in situations of crisis (“the duty of non-interference stops where the risk of non-assistance begins“, according to François Mitterrand) and the respect of states’ sovereignty. Formalized in 2005 by points 138 and 139 of the final document of the United Nations 60th Anniversary Summit, the concept of R2P was again used in September 2009 by the General Assembly of the United Nations, which by consensus adopted Resolution A/RES/63/308.
2. The conformity of the Realist tradition. As far as they are concerned, Operations Serval and Barkhane led in parallel to the Sangaris intervention are true to the Realist tradition. Their justification falls very clearly within the traditional framework of inter-state relations. The first argument lies in the request for assistance from an allied country and in the right of collective self-defense recognized by Article 5 of the UN Charter. Inasmuch as this support is true to defense agreements concluded by France with a number of its former African colonies; it is not even necessary to resort to a theoretical argument since any lack of interference would have been interpreted as the demonstration of an avoidance strategy and the non-respect of commitments made. At the same time, the historic responsibilities of France with regards to its former colonies explained the recourse to classic rhetoric of “rank” and the defense of “values” by which the French state uses its armed forces both as a “shield” and as a “pavilion“. As such, these distant and expensive intrigues contribute to what John Mearsheimer calls “the fatality of great powers” obliged to intervene in order to justify their status. Finally, the invocation of security risk fits within in the framework of Neorealism that replaced power by security as the keystone of international institutions (C. Glaser, J. Grieco…). The situation of failed states was unanimously considered to be a major source of global insecurity (2013 French White Paper on Defense, European Security Strategy, 2003 and 2008). These interventions can easily be justified by France’s interest in stabilizing grey zones liable to become a direct threat for its own security in the short term.

How then do we reconcile these two approaches, theoretically contradictory, but diplomatically comprehensible. We can cite three elements. Firstly, it appears very clear that we are faced with distinct situations that impose different solutions. Just like Canada can pursue different policies based on human security throughout the world and using Realist arguments can defend its maritime rights in the Northwest Passage, France intends to call upon its values and interests in order to undertake operations – more complimentary than really contradictory – in action areas (issues) and zones that do not call for the same responses. Secondly, from now on, the Liberal two-level game is integrated into Realism (Neoclassic) that concedes the influence of interior considerations on exterior practices. Thus, the support of public opinion, necessary for an operation that, like Barkhane, is designed to last, has humanitarian intervention as compensation, like Sangaris in the CAR. Finally, Liberals and Realists have been able to reduce their mutual opposition, insofar as the concept of global security is concerned – of which humanitarian security is a component – and this requires taking the security of each individual into consideration. However, this condition necessary to global security is not sufficient. A new equilibrium between every individual’s natural right to security and the demands of positive law must now be established. Without reference to past practices, this equilibrium must be redefined.

If a problem of coherence persists, it must nonetheless be considered a reverse situation to the extent that the multiplication of humanitarian interventions advocated by Liberals appear henceforth to be a factor of instability, while Realism contents itself with building peace on the balance of threats. By reinventing just war, Liberal causes must from now on be considered as threats to the peace of States, which has however been acquired by forgetfulness (and sacrifice) of civil societies. It is proving to be possible to choose between the lesser of two evils, but it not clear whether peace will result from the convergence of doctrines that consider strength to be vital to peace (Realism); which can be sacrificed when it is a question of offering assistance to populations in a state of emergency (Liberalism). Avoiding the negative effects of this merger may require paying attention to the teachings of critical theory that, via Ken Booth, revise the three major dangers that would allegedly establish for world peace 1) the Cult of Urgency (presentism); 2) transitional justice (culturalism) and 3) alleged scientific neutrality.

1 Name of an African butterfly