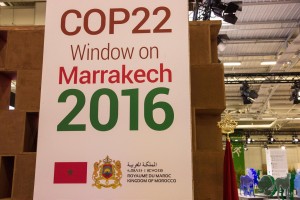 The COP22 was held in Marrakech from 7-18 November 2016. Its aim is to implement the principles established during COP21 into practical steps. This summit is happening against a backdrop where most of the climate change skeptics have disappeared from the scientific field. However, some of their principles are advocated in some industrial countries by populist movements and political leaders hoping to win votes (Sarkozy in France, Trump in the United States). As for previous conferences, COP22 is faced with the issue of the climate debt and how to spread its funding.
> Historical background
> Theoretical framework
> Analysis
> References

The United Nations Framework Conventions on Climate Change has been signed in 1992 and enforced in 1994 by the Conference of the Parties (COP).
The 1997 Kyoto Protocol constituted then a major step forward. Enforced in 2005 and ratified by 175 countries, it set the principle of ‘common but differentiated responsibility’ and introduced emissions rights, though exempting emerging countries from reducing their GHG emissions (Greenhouse Gas). However, the treaty did not take into account ‘virtual emissions’ or carbon leaks resulting from international trade. Moreover, the United States did not ratify it and the CDM (Clean Development Mechanism) had a very limited impact for Africa. Eventually, the 2009 Copenhagen Negotiations stalled.
On the contrary, the UN Agreement on climate signed in December 15 during the COP21 was a tangible achievement. Its aim is to limit global warming to no more than 2°C by 2050, and reduce CO2 emissions by 50% in 2010 and 100% by 2100. The text planned for a minimum funding of 100 billion dollars per year for the Group of 77 (G77). Unanimously approved by the 196 delegations, it is a diplomatic success nonetheless obtained through major concessions and uncontrolled promises. If it does rely on fair foundations, commitments and practical steps remain extensively blurry. Moreover, the negotiation on transparency failed. The document has nevertheless been ratified by major GHG emitters and enough States Parties to come into force.
If the COP22 could not benefit from the same global outreach as COP21, it nonetheless took place in Morocco as a symbolic recognition of the country’s pioneering energy transition. In Morocco, 97% of electricity is imported whereas energy consumption increases by 7% each year. The aim is to raise electricity supplied from renewables to 52% and reduce GHG emissions by 32% before 2030. Moreover, 64% of the climate expenses are allocated to adaptation and energy transition towards renewables (solar and wind energy), amounting to 9% of total investment expenditures.
Within the United Nations, Millenium Development Goals have been converted to Sustainable Development Goals, and this embodies a paradigm shift impacting both the Global North and South.

Theoretical framework
Climate Conferences can be understood through two major strands.
1. Strategies to cope with climate risks. Should climate hazards be tackled through proactive strategies or precautionary approaches? Should we favour compensation mechanisms or adaptation, resilience (capacity to recover from shocks) and mitigation (reducing the effect of damage)? Should environmental management be a question for local authorities or should it involve all parties on a global scene?
2. The lack of supranational authority on climate matters. Being formed by an assembly of sovereign States, the classic multilateral framework does not appear to be able to deal with climate and environmental issues. There is no supranational authority or global environmental organisation entrusted with the management of global common goods.

Analysis
There is little skepticism within the scientific community about the scale of recent and future climate change. Global warming has already been estimated to 0,6°C. It has led to extreme weather events such as droughts, floods, and long term reduction of precipitations in arid areas. Known effects of these climate hazards are desertification, hydric stress, induced vulnerability for agriculture, small islands and coastal towns. Eventually, these events dramatically impact public health and migration flows on a global scale. GHG emissions have quadrupled between 1959 and 2014, while the world population jumped from 3 to 7.2 billion individuals. GHG emissions have grown from 3 to 5 tons per capita. The location of main emitters has also evolved. In 1990, developed countries accounted for 2 thirds of the emissions when today the Global South – mainly emerging countries – account for half of it. However, GHG per capita emissions in the Global North reach 10.8 tons for only 3.5 tons in the South. Sub-Saharan Africa however only emits 0.87 tons of CO2 per capita.
But these localised emission data must be corrected as:
– They do not include the depletion of forest resources (carbon sinks) and non renewable energy resources, which are mainly exported. For example, in Africa, the adjusted net savings (national savings – (CO2 emissions + depletion of energy, forest and mineral resources) was negative in 2007-2009. The DRC, Congo, Nigeria and Angola featured the lowest negative net savings.
– They do not include the impact of foreign trade and delocalisation of GHG emitters in a context of globalisation where transnational firms might bypass environmental norms and easily yield to environmental dumping. Moreover, GHG emissions per imports and exports have to be factored in to enable the calculation of the carbon footprint for each segment of the global value chains. But eventually, delocalisation and externalisation of climate pollution seriously weakens the virtuous declarations of the Global North.
As climate negotiations do not factor in the transnational dimension of firms, the United Nations Framework Convention on Climate Change ends up widely disconnected from trading negotiations, especially within the WTO or multi-stakeholder agreements. Within a globalised world and a market economy, environmental protection should be closely associated to trade and investment. On the contrary, negotiations and international agreements favour national sovereignty instead of taking into account the connections between the multiple government levels, from global scale to nations, regions and local authorities.
Moreover, energy transitions differ according to the stages of development of various countries. African countries could facilitate a green growth development pathway through the diversity of their partners, technological revolutions reducing costs and the ability to bypass some stages, without handling costly infrastructures dependent on fossil fuels. Public actors but also non-State actors are required to enable these differentiated pathways, if only benefiting from ad hoc funding, not limited to cash transfers captured by rentier States. The COP22 should allow to consider every possible scenario.