PAC 146 – Countering Illegal Fishing: the Failures of a Normative Framework The African Union Summit on Maritime Security and Safety and Development, Lomé, Oct. 10-15. 2016 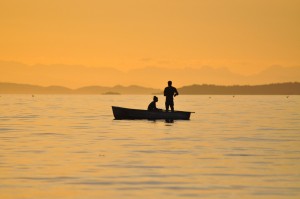 From October 10 to 15 2016, the African Union Summit on Maritime Security and Safety and Development took place in Lomé (Togo). At the end of the meeting, thirty-one States adopted a charter to combat maritime piracy and IUU fishing (Illegal, Unreported and Unregulated fishing).

Historical background
West Africa is one of the regions of the world most affected by illegal fishing. It should be pointed out that this practice is to be distinguished from unreported and unregulated fishing. As these practices are usually linked, illegal fishing is however a criminal act perpetrated at international level and the latter falls within the scope of local poaching or may be an infringement to existing national regulations.
If the scope of the phenomenon is difficult to assess – mainly because of 1) the low coercive powers conferred to the Regional Fisheries Management Organisations (RFMOs) , 2) the non-existence of a regional cooperation between the States, 3) a lack of national monitoring devices, 4) a lack of coordination of the harbour authorities in this field, 5) the transnational dimension of the operations and – as the case may be – of the criminal networks involved, 6) the complexity of the laundering mechanisms – these catches are however estimated to between a third to a half of the catches in West-African waters, approximately amounting to 1.3 billion dollars. In 2013, a team of researchers from the Sea Around Us Project – a programme developed within the British Columbia University in Canada to gather vast amounts of data on international fishing – has quantified the impacts of this phenomenon in Senegal. According to the conclusions then issued to the government, the shortfall approximately reached 300 million dollars per year.
As fisheries have been declining steadily as from the mid nineties – according to the last FAO report, the proportion of overexploited stocks has escalated from 10 to 31,4% – the combat against illegal fishing became a key challenge in order to drive fisheries towards a sustainable path of development. Moreover, illegal fishing is today a major issue in terms of food security for coastal developing countries.
Currently, this issue features amongst the main priorities of the international agenda related to ocean protection. In September 2015, the UNDP (United Nations Development Program) has set up new OFD (Objectives for Development) in which the fourteenth objective related to « Aquatic Life » plans the elimination of this practice. In June 2016, significant progress has been made with the enforcement of the FAO Agreement (dubbed as the « PSM Agreement ») aiming to prevent, deter and eliminate illegal, unreported and unregulated fishing. Adopted in 2009, this treaty compels participating countries to 1) « enforce harbour controls measures of fishing vessels », 2) « deny harbour access and use of harbour infrastructures to vessels involved in illegal activities » and 3) « secures access to shared information gathered by the States on these vessels ».

Theoretical framework
1. The failures of maritime governance. Adopted in 1982 in Montego Bay, Jamaica and enforced in 1994, the UNCLS (United Nations Convention on the Law of the Sea) regulates the use of interior seas and of the ocean. More precisely, the text established the sovereignty of coastal States on their national waters. Any country may file an official request and has a right to dispose of an EEZ (Exclusive Economic Zone) of 200 miles on which it has sole authority to decide of the activities developed within the area (mineral exploration and extraction, renewable marine energy (RME), fishing, tourism, etc.) In spite of this legal disposition, West African countries – whose abundant fish stocks are much coveted – struggle to uphold this right. Because of a lack of control over the sea, authorities are not able to stop all fishing vessels illegally operating in their EEZ, as these vessels use various schemes to avoid localization systems.

2. A transnational criminality. Operated in various areas – mainly in West Africa, South-East Asia and Antarctica -, involving many States – especially those offering convenience flags – and relying on organised networks, IUU fishing is today a new form of transnational criminality. As a response, new instruments are implemented (agreements, charters, surveillance programs, etc.) that have emerged from a coordination of multiples institutions tackling the issue (OI, regional organisations, States, NGOs, universities). However, these initiatives remain variable and have only just begun to evolve towards functional cooperation, due to of a lack of achievement of the States’ commitments.

Analysis
The adoption of the UNCLS in 1982 has been preceded by three international meetings, the first one being the Geneva Convention on the Law of the Sea in 1958 which led to the signing of four conventions. However, these regulations have been quickly questioned by developing States that just gained their independence. It should be reminded that in the fifties, European fishing companies (Spanish, French and Portuguese), facing the decline of some North-Atlantic species, started operating in West Africa. In the same period, many scientific studies established the existence of abundant stocks in the area, which triggered the development of these trawlers in the Gulf of Guinea. Following these disputes, a second conference was held in 1960 but closed without any agreement being reached. A third conference opened in 1972 and closed in 1982.
By establishing the principle of EEZ, the text authorizes States with significant fisheries to protect it from foreign fishing vessels and favor their own fishing fleet. Moreover, the Montego Bay Convention provides that any States that are not able to exploit their stocks fully may sign partnerships with third countries to grant them access to the surplus in exchange for a financial contribution. Lacking adequate infrastructures or means to invest in new units, or even data and/or expertise to challenge assessments released by foreign scientists, most of them have thus signed partnerships and collected taxes on the catches’ value.
However, this process has not been paired with reinforcement of maritime security in West Africa. A growing number of foreign fishing vessels – from Europe first, then from Russia, China, and South-East Asia in the nineties – started operating illegally in these waters, to the detriment of local fishermen. Within decades, the phenomenon has increased dramatically, to such extent that it now jeopardizes already weakened ecosystems together with the local socioeconomic equilibrium of coastal communities, while posing a major risk to food security. Furthermore, the decline of fish stocks leading some Asian ship-owners to find a way to decrease their exploitation costs, has induced human trafficking such as embarking groups of Burmese refugees.
As such, combatting this transnational criminality became a priority on the international agenda. In West Africa, several operating procedures have been identified. One of the first strategies to avoid surveillance are 1) turning off the Automatic Identification System (AIS) and/or the Vessel Monitoring System (VMS) 2) transmitting false data or 3) modifying the vessel’s identification marks. A second method relies on transshipping illegal cargoes, such as laundering catches onto one or more refrigerated vessels that already contains legal catches. This may be done in port, near the coast or on the high seas. Another technique may be false registration, as it happened with fish-poaching vessel Thunder (PAC 126). Lastly, the serious lack of transparency for license delivery in West African countries also prompts illegal activities.
In order to curb these practices, the FAO – the main international organisation operating within the marine fishery sector – has crafted the PSM agreement, advising a more strict regulation of harbour activities. In fact, the treaty foresees intensified data sharing between the States, IO and ORGP in order to 1) improve identification and tracking of smugglers and 2) more efficiently take control of units involved in illegal activities and illegal transshipping. The recent development of advanced technologies – such as real-time monitoring device Global Fishing Watch resulting from a cooperation between Google, SkyTruth, Oceana and several universities – allows for a dramatic step forward in terms of localisation. However, only 47 States are currently parties to the agreement, of which only 7 West African countries (Angola, Benin, Gabon, Gambia, Ghana, Guinea, and Sierra Leone). To this day, none have yet ratified it. The same applies to the Lomé Charter, that lacks two major States parties, Cameroun and Senegal, which economies are nonetheless deeply affected by foreign intrusions in their national waters. It should be underlined that the text only states general guidelines – especially in terms of information sharing between States – and does not consider any implementation of a specific mechanism.
As no clear commitments have been taken by the affected countries, the combat against illegal fishing is not yet to deliver tangible results. But progress is nevertheless vital, considering that in addition to being overexploited, fish species located in the equatorial seas are already affected by the consequences of climate change.