PAC 119 – Individual Dynamics in the face of Climate Change Popular mobilization for the climate, September 21, 2014 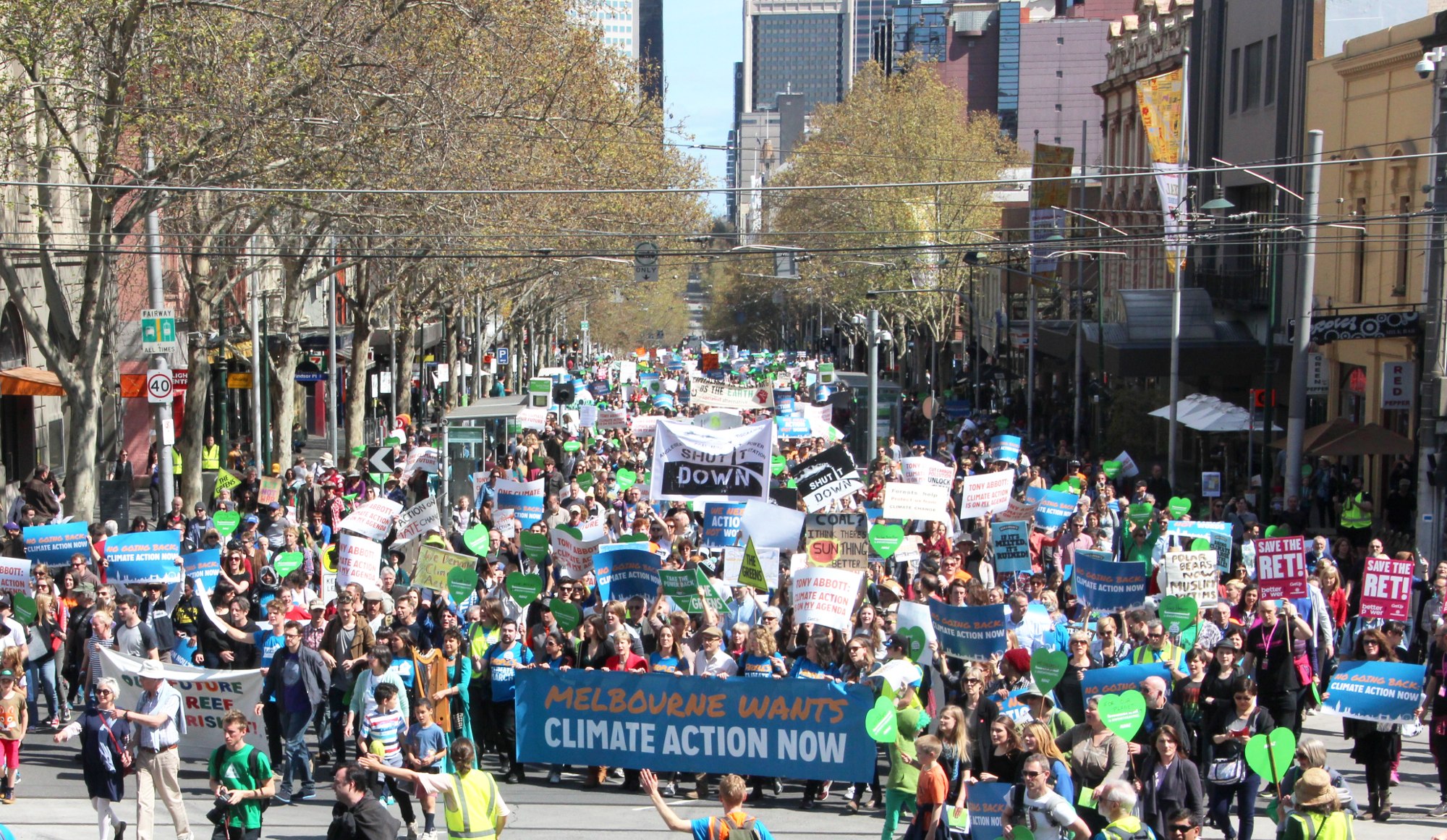 On September 21, 2014, hundreds of thousands of people protested in major cities around the world in favor of the fight against global warming. Led primarily by the NGO Avaaz-Le Monde en Action, the gathering was structured around 2,700 events in 158 countries. Moreover, it mobilized numerous politicians, experts and celebrities including the Secretary General of the United Nations Ban Ki-moon, the former American Vice President Al Gore, the mayor of New York Bill de Blasio, the anthropologist Jane Goodall, the French Foreign Minister Laurent Fabius, the French Minister of Ecology Ségolène Royal, and the American actor Leonardo DiCaprio.

Discussions on the theme of climate governance began at the end of the 1980s in order to respond to scientific findings on changes of atmospheric composition. The United Nations Framework Convention on Climate Change (UNFCCC) – which aimed to reduced greenhouse gas emissions (GHG) – was signed at the end of the Earth Summit in Rio in 1992. Based on the UNFCCC, the Kyoto Protocol was adopted in 1997, and entered into force in February 2005. It was the only global treaty to impose binding obligations on industrialized countries. However, the United States’ 2001 decision to refuse to ratify it proved to be detrimental to its implementation. This is why the signature of a brand-new treaty in the post-Kyoto phase is proving to be just as difficult. According to the future roadmap approved in Bali in 2007, states should have finalized a new treaty in Copenhagen in 2009 (Conference of the Parties, COP 15). Yet, despite expectations and heightened pressures, notably from civil societies, no significant progress was observed during this summit. In December 2012, during the conference held in Doha (COP 18), the Kyoto Protocol was extended until 2020, while the adoption of a new universal treaty was postponed until 2015. During the COP 19 which took place in Warsaw in 2013, environmental NGOs implemented their first boycott of the conference in an effort to denounce the immobility of the process as well as the supremacy of large companies in the course of negotiations.

On September 23, 2014, more than 120 heads of state and of government gathered for the summit of the UN in New York in preparation for revival of the project of a veritable treaty to be in force by 2020. Two days before the summit, protests were organized across the globe in places like London, Berlin, Paris, Stockholm, Rome, New Delhi, Melbourne and Rio de Janeiro. Thousands of citizens paraded alongside NGOs. In New York, the largest march ever organized assembled more than 300,000 participants, divided into six large groups each making distinct thematic demands. Representatives of the populations most vulnerable and most affected by climate change appeared on the front lines.

1. Individual dynamics. It is a question of ordinary, individual networks mobilized by their collective membership. According to James Rosenau, if we examine the individual parameter, we note that the feeling of submission and loyalty of individuals and groups towards state authorities weakens. On the other hand, we observe at the same time that their capacity to be moved and to feel concerned by an international problem grows. Today it should be noted that the inter-state system coexists with a multi-centered operation. We have entered into a period of “global turbulence” where citizens can be pivotal on the world stage. These phenomena illustrate a revolution in the aptitudes of commitment. Accordingly, we are invited to re-evaluate our roles by taking into consideration what Rosenau deemed “micro-macro mixing”.
2. International fame. It refers to people who due to their personal qualities and skills, use their prestige and notoriety to involve themselves in international questions, sometimes to the point of rivaling states. This concept of the “altruistic citizen” is also evoked by Rosenau.

Despite difficulties put into place by new measures to treat global warming, the level of awareness has risen considerably since the 1980s. Thanks to the initiative of NGOs, international experts and media, citizens are more engaged in matters of environmental politics. Often during conferences, demonstrations and civic activities have succeeded in accelerating the processes of negotiation. We shall recall that during the COP 15 in Copenhagen in 2009, around 3,000 people gathered outside the Bella Center where the meeting was to take place, in order to hold an “Assembly of the people” alongside NGOs and other representatives. Unquestionably, the impact of this individual parameter has been accentuated during recent decades with the Internet. Clearly this technology allows millions of people, who share the same opinions, to unite rapidly to the point of forming a powerful collective dynamic. Thus, Avaaz is not an example of an environmental NGO, but a global platform of individuals presenting the characteristics of a poorly institutionalized movement and with no hierarchical authority. Rather, its strength comes from its potential to unite which allows it to pool and to synergize the fight of numerous NGOs, communities and networked individuals. This collective union is the best guarantee of efficiency in seeking to be heard by states who themselves are condemned more and more often to seek to dialogue with their citizens. This new type of cooperation is treated as a specific strategy aiming to optimize the plans of reduction of CO2 emissions and of adaption to climate change.

During the demonstrations, people identifying themselves by their reputation and their knowledge do not comprise a group of specialists on climate change, but an international elite benefitting from high media visibility. To the point that in certain cases, they even exert an authority more powerful than that of many rulers. These individuals – such as the Secretary General of the United Nations, the mayor of New York or else any given Hollywood star – are capable of mobilizing their symbolic capital on the international scene. They draw their legitimacy not only from themselves, but also from the institutions that they incarnate. Their engagement to the international movement Avaaz testifies to their ability to act in favor of the fight against climate change. Thus, the actor Leonardo DiCaprio, designated a “messenger of peace“, has been given a symbolic and institutional credit allowing him to call these issues to the minds of the general public. In the same way, marching with citizens struck by the vagaries of weather, these celebrities spread an urgent message to the world to act in the face of this planetary menace.

This recent and unprecedented mobilization of civil societies aims to remind heads of state that they must address climate change in a more significant way. From now on, millions of individuals capable of combining their actions exert effects, sometimes major, on more and more challenged and weakened states. During the meeting which will be held in Lima in 2014, the first draft of a global treaty will be developed to be approved in Paris by all countries at the 2015 summit.