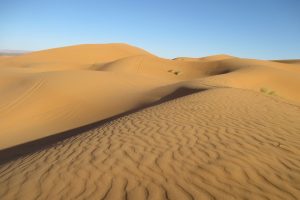 In Mali, in a context of failure of both political power and of the army, Touareg rebels of the National Movement for the Liberation of Azawad (NMLA or MNLA), acting jointly with Islamic movements have unilaterally proclaimed, in May 2012, the independence of Azawad. This situation, which leads to the de facto secession of Mali has already led to the fleeing of numerous Malians leaving in the North of the country. Timbuktu, The Mecca of the Sahara, is henceforth controlled by Ansar Dine , whereas some Algerians are known to have been taken hostages in Gao. Beyond these conflicts, the whole Sahelo-Saharan region is concerned.

These Touareg movements have existed for some time. Colonial France had opposed Touareg warriors during World War I – while at the same time enrolling them in the Saharan Meharist Companies. At the turn of the 4th and 5th Republics, around 1958, the Common Organisation for Saharan Regions (COSR or OCRS) had as its ambition to create an independent Touareg space, notably to dissociate from Algeria the hydrocarbon-rich Sahara. Azawad has been marked since the independence of Mali by cycles of rebellion, of repression and of negotiation. Kaddafi’s regime had thus recruited in 1972 numerous Touaregs from its Islamic region and periodically revived tensions, before imposing itself as negotiator. However, agreements acknowledging more autonomy and rights to the Touaregs have generally remained a dead letter. The recent downfall of the Kaddafi regime has reactivated these antagonisms, on account of migrants and mercenaries returning home equipped with heavy armament.

One can note nowadays a novel amplitude and nature of claims present. To be sure, the NMLA movement (3000 heavily armed men) has proclaimed independence in rupture with former claims which dealt hitherto simply with equality of rights, a greater autonomy and a lessened marginalisation of Northern Mali. To do so, it was backed by Islamist militias, the Ansar Dine of Lyad ag-Ghali Movement – which advocates Charia – and the MUJAO or UMJWA (Unity Movement for Jihad in West Africa), both having links with Al Qaida Maghreb Islamique or AQMI and even, according to certain sources, with Boko Haram.

1. The weakness of the State. The mutiny of rank-and-file military quickly became a putsch with accusations of laxity, nay connivance between the political power and the rebel movements. President Amadou Toumani Touré quickly had to give up his position and National Assembly President Traoré was designated as the transition head of State. This politico-institutional crisis, however, bears testimony first and foremost to the extreme weakness, if not the vacuum of the State. In a country where one witnesses a demographic explosion made worse by recurrent draughts, the situation is marred by traffics of all kinds (cocaine, automobiles, hostages, weaponry), armed conflicts (various Katibas, Al Qaida Maghreb Islamique, Touareg movements) as well as rivalries linked to mining and to the oil industry. This situation brings extreme weakness to portions of population exposed to tensions as recurrent as ancestral (between sedentary farmers and nomadic herdsmen, between descendants of razzia raiders victims of raids).
2. The mounting power of non-State actors. The saharo-Sahelan arc brings together the conditions necessary for non-State actors (such as the NMLA, the Mujao, etc.), however heterogeneous, may now extend their grip on the territory.

The objectives of the NMLA (the independence of Azawad), that of Ansar Dine (to establish the Charia in Mali) and that of certain Katibas of AQMI (to set up a khalifat of Mauritania and Somalia) differ. A priori, links appear limited between the djihadist Salafists of AQMI and the Berber Touaregs, who are part of the Malekite branch, which is opened to the Soufism of the Tidjânyia or Kandinya brotherhoods and crossbred with animism. However, the territories where AQMI reins remain the same ones as those where Touaregs are deployed. As to the Adrar region of the Ifaghas, it seems to be a sanctuary for certain katibas. Morever, connivance of interests exist undoubtedly within the control of cocaine- and weapon-trafficking even if some were hoping that the Touareg mercenaries who had returned from Libya would mobilize to oppose AQMI.

Actors concerned by the Malian crisis appear most diverse. Algeria cannot accept the independence of Azawad. Northern Niger shelters some 700 000 Touaregs and is close to Northern Mali. The ECOWAS (Economic Community of West African States) is concerned by the regional dimension of the conflict: the Community can utilize, within the ECOMOG (Economic Community of West African States Cease-fire Monitoring Group) a Force of between 2000 to 3000 men. However, history shows the low efficiency of ECOWAS troops and this Force would require time before it proved efficient, besides the fact that it would be confronted with problems of logistics. France has for its part been present in the onset of the crisis with the collateral effects of the NATO intervention in Libya, and is felt to be close to the Touareg movements and to be directly concerned by the future of the hostages at a time of elections. France has thus asked its citizens to temporarily leave Mali, without doing as much as intervene militarily.

Humanitarian drama is enhanced by the incoming flows of refugees (200 000 on Malian territory and in neighboring countries, Burkina Faso, Niger, Algeria – as of March 2012) as well as of displaced peoples. The disorganization of production and the impossibility for humanitarian actions to take place normally make the situation all the worse. A mobilization of international aid appears therefore urgent. The independence of Azawad has no legitimacy but the de facto secession will endure. However, solutions seem less military as diplomatic and economic.