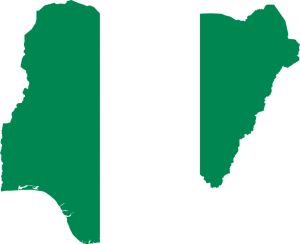 At the beginning of 2012, Nigeria, ally to the United States and Great Britain, has been undermined by two great crises: 1) that of the North-South confrontation characterized by the spiral of ethno-religious tensions; 2) that of the general strike tied to the increased price of gasoline. Threats by the two great labor unions to stop petroleum production of the prime producer in Africa equally contributed to the gravity of the situation. Certain authorized voices – such as the Nobel prize winner Soyinka – went so far as to evoke the risk of a civil war. Others for their part highlight the risk of secession advancing the comparison of Nigeria to the case of Sudan divided between the Muslim North – where the Sharia reigns – and the Christian South. A leading African country with its population of over 150 million habitants, this federal state– where there is no stop to alternating civil and military regimes –, is familiar with endemic violence which weakens it.

Formerly a British colony, today Nigeria is a federal state composed of 36 states contested by centripetal forces which were contained until the present by strong military and civil powers or by federalism. The increase in the number of federal states or rules relative to the transfer of political power between the North and the South or yet still the territorial sharing of income, equally contribute to this logic.

The systems of sultanates and chieftainships of Northern Nigeria strongly differ from the rather cemented sociopolitical organizations of the South. These differentiations were maintained by the indirect rule of the British colonial administration. Since then, the North, where 12 States established Sharia rule, remains altogether disadvantaged in comparison to the South.

The country has been torn by several conflicts of which the most violent being the Biafra war of secession (1967-1970) which saw the opposition of the Ibos (supported by France, Israel and Portugal) against the federation (supported by the United Kingdom and the USSR).The causes of this war are likened at the same time to sociopolitical and religious factors and especially the oil stakes setting major powers and chief warrant officers against each other; these tensions led the internal rivalries in Nigeria. In 1970, 3 R’s (reconstruction, rehabilitation, reconciliation) symbolized the end of the conflict. But the country was familiar with numerous tensions between the North and the South and conflicts at the heart of the Niger Delta.

1. Nigeria presents itself as a society characterized by petroleum income and its economic, social and political impact. Richly equipped with hydrocarbons, it also offers easy extraction conditions and transport options made possible by sea access. All together these factors make Nigeria one of the most coveted extraction sites in Africa. However internal tensions have intensified because 90% of these riches are concentrated in the Niger Delta.
2. Nigeria has been historically marked by North-South cleavages both on the social and religious planes. The confrontations between Christian and Muslim communities show that these cleavages are tied to the differences of rights and disparities in the division of the oil pension.

The Nigerian conflicts can be deciphered under two main criteria.

The first refers to hydrocarbons. Indeed this sector is strategic from a macro-economic point of view with an oil pension which represents between 35-40 % of the GDP (Gross Domestic Product), 80 % of fiscal receipts and 97 % of the country’s exports. In 2011, the level reached 2.5 million barrels per day at 75 dollars the barrel, making Nigeria the eighth world exporter of oil. Six multinationals control 95 % of the production among which more than 40 % is exported towards the United States being 10 % of their imports. In fact, oil aggravates the number of political tensions because it is concentrated in the Southeast and leads to strong differentiations between states. In the Niger Delta (9 federated states including 30 million inhabitants), certain movements, such as the Movement for the Emancipation of the Niger Delta (MEND), and certain dissident factions have developed considerably. The hydrocarbons sector and the price of the gasoline appear just as much in the heart of social conflicts as far as the oil pension arouses grand corruption and strong capital flight. Now, the redistribution of pensions between states and populations should have particularly been passed as a subsidy allowing two thirds of Nigerians (having an income lower than 2 dollars a day) to access primary necessities.

Within these oil challenges, overlaps a second crisis factor: the North-South cleavages. In the Plateau State capital, Jos, conflicts see opposition between the Fulani Muslims and the Christian Berom, two populations which have different rights. As for the Islamic spheres of influence in the North, they are plural (Sufism of the traditional brotherhoods, the Salafiste, Maadhistes and Shiite movements) with 12 (of 36) states having established Sharia law. The situations of great inequality and exclusion from the rights in a country where the division of the oil pension remains uneven, constitute the main elements explaining the power of Muslim networks; certain politicians want to instrument religious oppositions and spread the Sharia in the Plateau State. The most important question, due to upheavals that occurred in Libya, is at the moment the proliferation of the AQMI (Al-Qaeda Organization in the Islamic Maghreb) nebula. The anti-western Boko Haram movement appeared after September 11th, 2001 located in the State of Borno henceforth developed djihadisme; the movement split into several branches, one being close to the Chebabs of Somalia and Aqmi. Now by its radicalization and violent actions, the movement favors a religious cleavage engendering a spiraling of violence, reprisals and repression.

External powers are also determining actors. Notably the United States to whom Nigeria provides more than 40% of their brut petroleum imports. As for China and India, they look to have their interests prevail in this region. Regarding the Arab petroleum powers and Iran, they press on the Muslim states in the North threatened by radical networks and zones of productions and petroleum transport to the South.

Today, the federal structure of Nigeria, the power of large retails in the North and the memory of Biafra make the process of a North-South separation, under the Sudan model, very improbable. Also, an extension of religious conflict is hardly possible because the North would be defeated. On the other hand, the legitimacy of the present regime has been questioned. The violence will lead to new compromises concerning: 1) redistribution of the oil pension, 2) eradication of corruption and 3) negotiations with the various political, labor-union, and religious protagonists? A contrario, is a return of the Jacobin army and the layman majority possible if violence is extended?